What's in your empty storefront? Capital One is closing both of its East Village branches 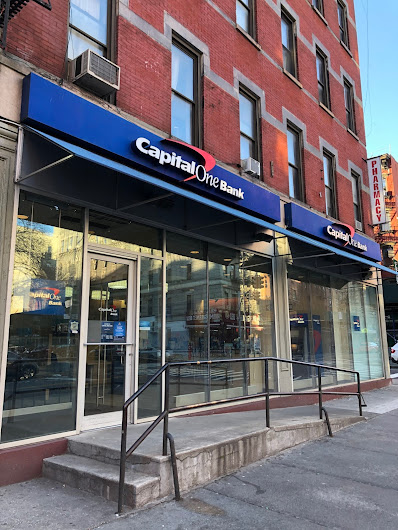 After May 8, Capital One will no longer have a bank branch in the East Village.

Closing notices are up in the locations on Third Street and Avenue C (above) ... 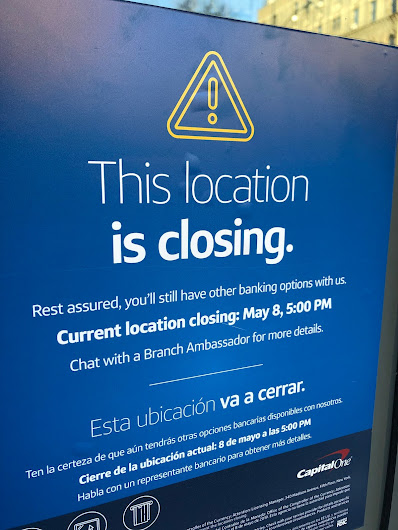 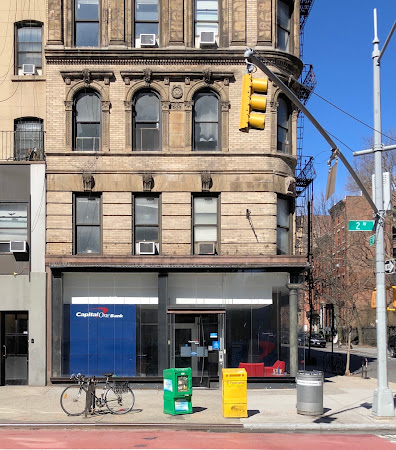 [Photos on 2nd Avenue by Steven] 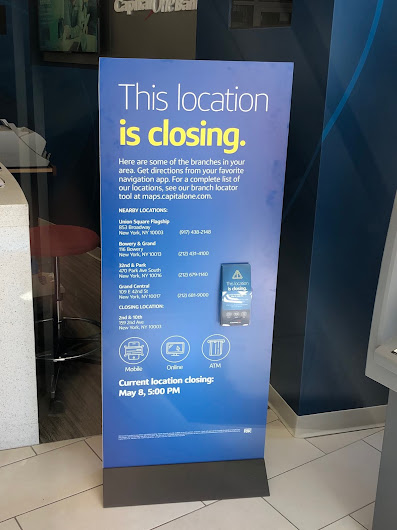 The Capital One on the southeast corner of Third Avenue and 14th Street closed in July 2016 (that retail space is still for rent).

The bank is sending customers over to the newish multi-level flagship location on 14th Street and Broadway. (An EVG tipster first told us about these pending closures in January. Per the tipster: "It's Union Square or be damned" for Capital One customers.)

This continues the trend where banks are closing down local branches. Last June, The Wall Street Journal reported that banks across the United States have closed nearly 9,000 branches this decade "as more customers rely on digital tools to complete routine banking transactions."

In recent years, Citi, Chase and Santander all shuttered their outposts on Avenue A, making it a bank-branch-free zone for now.
Posted by Grieve at 4:30 AM

Grrr. I actually used both, guess i'll have to trek to the city within a city at 14th... at least not above?

Before Rectangles was L&M Restaurant.

Amalgamated is on 14th too, no biggie.

"Thanks" to banks and other chains willing to pay the big bucks, landlords force out local and irreplaceable longtime businesses.

Then the banks and chains leave - having permanently destroyed the neighborhood.

Even the banks can't make money.

Long before L&M, in the 70s-early 80s it was Arka, a fascinating Polish-owned store that sold everything from men's shoes to cans of house paint. You never knew what you were going to find when you went in there.

We're being redlined. Oh, not for color but for the fact that we don't have enough money to have bank accounts... So why pay rent?

Ones wonders about the way banks think, nobody could predict that people would be using online banking almost exclusively before opening all those bank branches in the past half a dozen years?

I bank at the Avenue C and 3rd Street location and was told by a teller that we should call the bank's main number and complain that we are left with no services in the East Village, and that it is possible they will open another, updated branch locally. Can't hurt, right?

why ANYONE would use brick-mortar banks is beyond my comprehension---(https://www.pymnts.com/news/banking/2018/banking-overdraft-fees-cfbp-credit-unions/)---bunch of online banks have NO FEES :)

Small businesses rely heavily on brick and mortar banks for daily cash deposits, change, and help with many operation issues. These branches will be missed. Capital One was/is the most small business friendly bank in the neighborhood. Unlike the clowns who run Chase, Capital One doesn't hammer small businesses with fees for cash deposits, change, having too little or too much money in an account , and monthly service fees. This is a hard hit for EV small biz. It will also serve to further kill foot traffic along the already depressed stretch of 2nd Avenue from 9th to 14th. In any case, I'd sooner stick a pitchfork through my chest than bank with those thieves who run Chase. I'll take the walk to Union Square. By doing so I'll keep about 15 grand in my business's accounts.

Will do. Maybe they can have an atm accessible somewhere at least

Chase is the worst bank of them all. Fees on top of fees. Hopefully they and their CEO Jamie Dimon will lose their shirts in the upcoming financial collapse (just Google “inverted yield curve” for more information). Years ago, as these banks expanded and took over all those prime corner stores, and then endlessly gutted smaller stores to create giant empty banks, it was easy to see this day coming. But we will never get those old stores back, just empty storefronts begging for another bar to open.

The banks will always take away as much of your money as you allow them to, because that’s what they are in business for. As Bertolt Brecht said, 'What is the robbing of a bank compared to the founding of a bank?'

I miss their food too even years latet