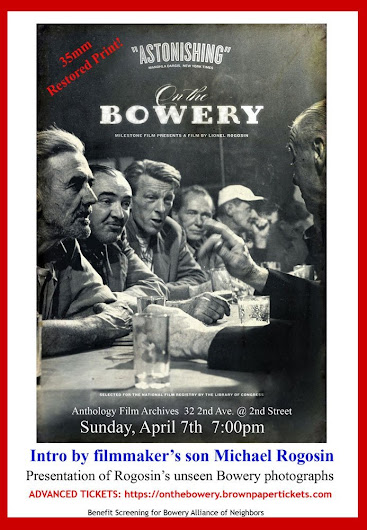 The Bowery Alliance of Neighbors is presenting a special benefit screening of Lionel Rogosin's 1956 documentary "On the Bowery" in a restored 35mm print on April 7.

The 65-minute film chronicles three days in the life of Ray, a railroad worker who drifts onto the Bowery. He enters the Confidence Bar & Grill and begins a weekend of drinking ...

The film was nominated for an Academy Award for Best Documentary Feature in 1957.

We're especially excited to have it introduced by the filmmaker's son Michael Rogosin, who will be presenting a slideshow peak at a rare trove of his father's Bowery photographs from the 1950s. He'll also share an excerpt of an interview of Martin Scorsese discussing the film's impact.

This benefit screening for the Bowery Alliance of Neighbors takes place Sunday, April 7 at 7 p.m. at the Anthology Film Archives on Second Street at Second Avenue.
Posted by Grieve at 4:20 AM

Email ThisBlogThis!Share to TwitterShare to FacebookShare to Pinterest
Labels: Anthology Film Archives, on the Bowery

It's a great movie that would most likely scare the new infesters to death.

This is a fascinating movie, watched on I think PBS some years ago. Seeing it will give you a wider perspective on how life can be when addicted to alcohol.

I can't wait for when the Bowery returns to the days shown in that film.