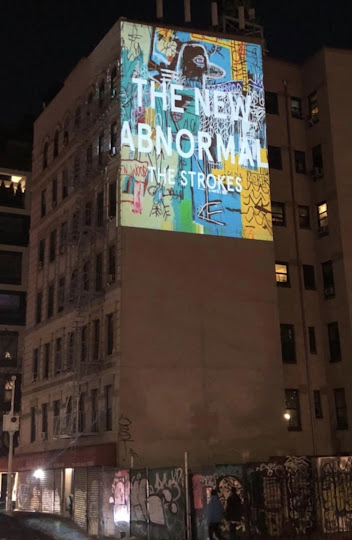 Multiple EVG readers mentioned seeing the ad Friday night and last night for the upcoming (surprise?) Strokes record being projected on the above building on Second Avenue at First Street. (H/T @GramPeder!) The projector was atop Avalon Bowery Place across East Houston.

Email ThisBlogThis!Share to TwitterShare to FacebookShare to Pinterest
Labels: ads, the Strokes

7 years? It better be good

Some faux roots, you mean...

Strokes exemplified the decline of the NYC music scene. bland and safe. not an edge to be seen. dull blade.

Roots? You're kidding of-course? They all went to Privates schools uptown. And one of the main members is the son of the owner of one of the Largest Modeling Agencies in the world..Some roots.

Roots was a poor choice of words. Perhaps ties? Because a few of them lived here at one point or another.

I took out that part of the sentence. Doesn't really matter.