44 Stuyvesant St. is on the sale market for the first time — ever 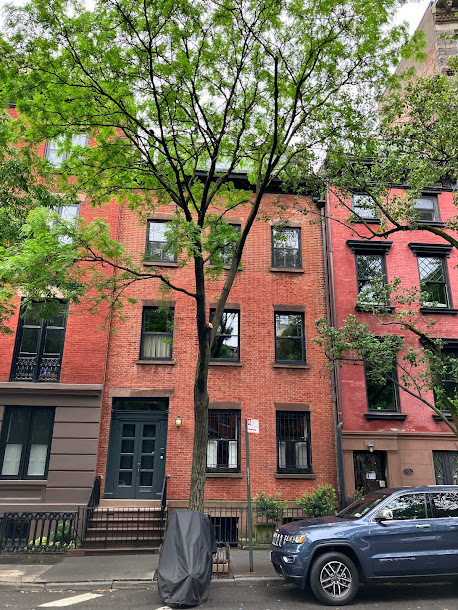 One of the most historic homes in the East Village (and NYC!) — 44 Stuyvesant St. — is now on the sales market for the first time, well, forever, apparently.
Here's the listing via Corcoran:

The location of this house within the St. Mark's Historic district cannot be more picturesque than where Stuyvesant Street meets East 10th Street. A wonderful and truly magnificent early Federal House that was built in 1795, for Nicholas William Stuyvesant, the great-great-grandson of Peter Stuyvesant. This house has immense historical significance as it is the oldest building in Manhattan that has been used continuously as a single-family house.
This is an elegant home ... with large rooms that possess beautiful proportions it also has 8 fireplaces. The scale of the house allows for extremely gracious living with 5 bedrooms and 4 and half bathrooms plus a formal dining room and a great artist studio that is 23' x 28' with a skylight also known as the atelier with soaring 12.5' ceilings! A lovingly landscaped garden is here too. This house has never been on the market for sale before. This is an exceptionally unique opportunity to own a piece of Dutch New York history — a true treasure!

Asking price: $8.9 million.
This link has some interior pics.
And the house was on the sales market very briefly last year, but the listing was pulled.
Anyway, here is some more history from a February 2022 feature at the Post:

Back in 1795, Nicholas William Stuyvesant — the great-great-grandson of the 17th-century Dutch colonial officer and governor of New Netherland (which became New York and New Jersey), Peter Stuyvesant — built the house for his wife, Catherine. The couple raised their nine children in the house, and more than 200 years later, it remains Manhattan's only building from the 18th century used purely and continually as a residence.

And via Atlas Obscura:

In 1969, the house was designated a landmark as part of the St. Mark’s Historic District. At this time it was one of the oldest houses to be used continuously as a residence in Manhattan. It rivals the Jumel Mansion and the Dyckman farmhouse as one of the oldest homes in the city, but it is certainly the furthest downtown.

It's a classic early Dutch colonial that any developer would not hesitate getting rid of. If it was anywhere else, it would have been demolished by now.

It’s cramped inside and the small windows

This is the oldest house in the East or West Village. A few years ago I told an elderly gentleman who was standing at the front door that I admired the house and asked if he was the owner. He answered yes and invited me in. We sat in the rear parlor and talked for about 20 minutes. The house had been completely renovated in 1900, and almost nothing of the original eighteenth century interior remained. Nevertheless it was a thrill to be there, and the gentleman was very kind. It was built the year construction began on Saint Marks Church which is essentially across the street.

Where Peter Stuyvesant is burried