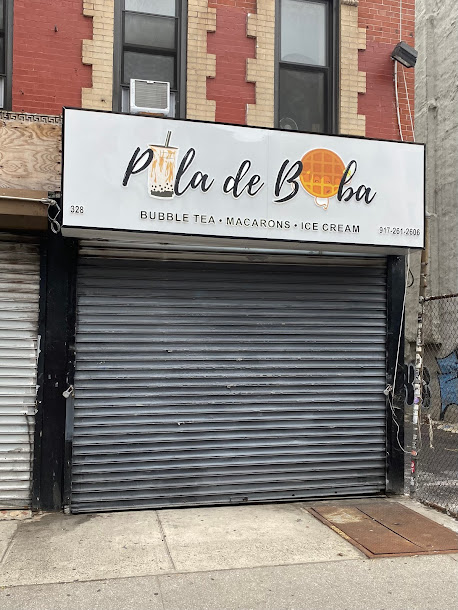 Pila de Boba, offering bubble tea, macarons and ice cream, is a new tenant for 328 E. 14th St. between First Avenue and Second Avenue.
The shop was scheduled to open this past Friday, per its Instagram account.
This space — now divided into two storefronts — has been vacant since Artichoke Basille's Pizza relocated across the street in June 2017. Before the move, the pizzeria suffered damage during a two-alarm fire. The FDNY said the fire was accidental — "due to heat from the pizza oven flue."
Various brokers have been trying to lease this space since early 2018.
Thanks to Steven for the photo, and Pinch for keeping a watchful eye on the space.
Posted by Grieve at 4:50 AM

Ugh, between the poor choice of design and font, this sign is no bueno.

Judge a book not by its cover, but by the content of its boba

As is the use of Spanglish

There is no Spanish used. Pila de boba means feed me boba in Hindi. The store represents southasian culture and offers a variety of great options !