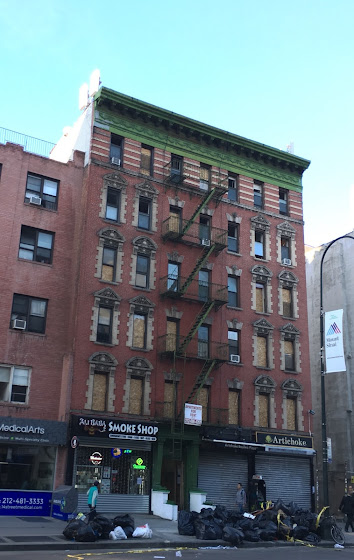 Here's a look this morning at 328 E. 14th St. between First Avenue and Second Avenue. Early yesterday, the FDNY responded to a two-alarm fire that reportedly started inside Artichoke shortly after the pizzeria closed at 5 a.m.

The fire spread from the ground level to second- and third-floor apartments through walls in the six-story building, according to the FDNY.

A manager said he called 911 after a neighbor texted him a photo of the burning building.

Firefighters had the fire under control by 6:27 a.m. There were no injuries, and it is not clear how the fire started, officials said.

One fire source said the blaze did not appear to have been intentionally set. 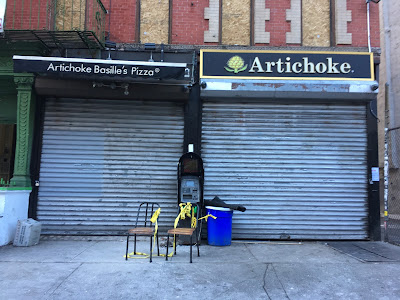 The city posted vacate notices on Artichoke ... and the newish Alibaba Smoke Shop next door (which does not look to have sustained any damage)... 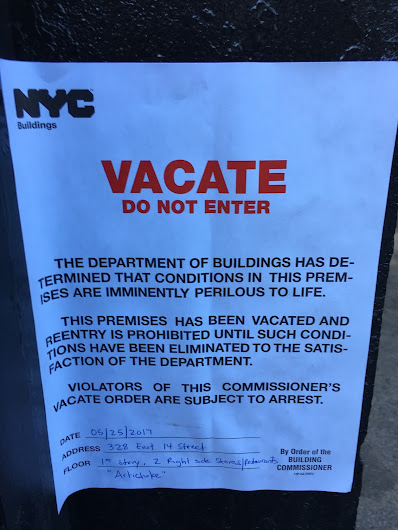 Artichoke has yet to comment on the fire, at least via their website or social media properties.

As you can see, most of the windows facing 14th Street have been boarded up. One 328 resident left this comment on yesterday's post: "Few of us have been displaced and need to find a new home because of the extensive damage to our apartments." 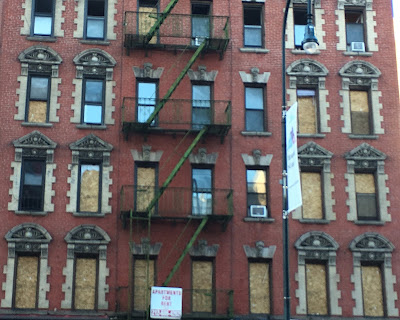 The 14th Street Y down the block opened its doors for residents ... and the Red Cross was on the scene to provide immediate assistance.
Posted by Grieve at 9:43 AM

"No, I think we should instead take a photo of the burning building, and then text it to the manager. He'll know what to do."

So did the fire start in Artichoke's ancient pizza ovens, or was someone messing around with the gas lines? Just because the fire does not look "intentional" does not mean that there wasn't neglect or improper activity going on. Unless they know what started the fire 🔥 then it's too soon to say it was an accident. I feel sorry for all the residents that not only had to put up with those loud Artichoke customers until 5AM every weekend but have now also lost ther homes.

That "Apartments For Rent" sign is a nice touch.

Just as a point of information: what does the Red cross/city do for burned out tenants? Do they put them up somewhere? A shelter? A hotel? For how long? Give them clothes? An allowance?

I too thought it odd, to see a fire, look at it, take the time
to take a photo, send it, hope the person gets the text
and then sees it at that precise time, so they could call 911.

Maybe this was some sort of setup.

I'm guessing that building is gonna come down, and a shiny new piece of supposedly luxury living will take its place. What a shame.

Where will those who are inebriated past a certain hour turn to for grub?

@cmarrtyy-I live across the street from the explosion/fire on 2nd Ave, March 2015.The Red Cross/city arranged for block residents without other options to be put up in hotels when we were evacuated for a few days. I took off immediately to stay with family in Jersey, so I never explored any financial assistance.

May these people not be displaced because of this fire. I hope everyone is able to land on their feet. This is right up there on my list of worst NYC fears. Hang in there, folks.

I think this is very much a nightmare for all us New Yorkers. If I was in such a situation, the only things I would take would be my cat and laptop. Everything else can replaced. My heart does go out to those affected by this fire. Hope they are okay.

No group photo smiling in front of this burning building like the group smiling with the Second Avenue explosion behind them??

No group photo smiling in front of this burning building like the group smiling with the Second Avenue explosion behind them??

That building is owned by my landlord Michael Harounian. Who had to replace ALL the gas lines in his other building where I lived. We had no gas for 9 months. Hmm...

I'm surprised that no one has remarked on the fact that the closest firehouse is literally right next door to this building. I'm wondering which FDNY unit responded, or if it was the unit next door, what the process was to extinguish the fire. Did they even take the truck out? Or did the firemen simply drag some hoses out the fire house door and connect them to a hydrant.