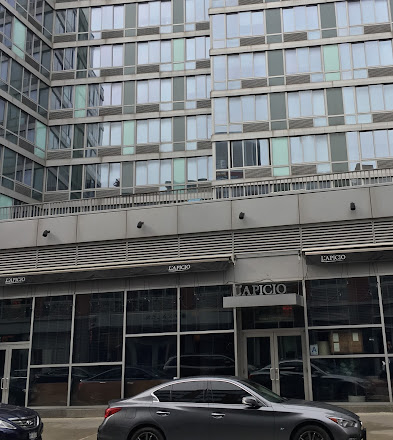 Empellón Cocina is not the only high-profile restaurant closing its doors after tomorrow.

As previously reported, the Italian restaurant on First Street in the Avalon Bowery Place complex was shutting down on May 20. The L'Apico team — chef Gabe Thompson and restaurateur Joe Campanale — did not offer a reason, other than thanking their patrons these past five years.

Back in March, Chef Sujan Sarkar applied for a new liquor license for the space for an unnamed restaurant that will serve "upscale modern Indian cuisine." CB3 approved the application, in part because this was a sale of assets and the method of operation will be similar here between Second Avenue and the Bowery.

Sarkar is the chef partner at Ek Bar, "India's first Artisanal cocktail bar." He is also the chef of Rooh, a similar-sounding restaurant that recently opened in San Francisco.

Previously on EV Grieve:
Chef Sujan Sarkar bringing 'upscale modern Indian cuisine' to the Bowery
Posted by Grieve at 4:00 AM

Email ThisBlogThis!Share to TwitterShare to FacebookShare to Pinterest
Labels: L'Apicio

There was a time restaurants and bars to some extent became destinations here, the wealthy loved to "slum it" now and then. Today our sad neighborhood is not slum enough to attract those dinners and we may have just reached the over saturation or culinary exhaustion.

Bummer. This place was great with kids. Mellow, relaxing evening. Will be missed.

The real problem with this place I believe was its location. Not very accessible to things. Not much foot traffic. And too many other Italian restaurant were in competition. Plus the aesthetics of it belonged more in the west village. Oh well. What do I know? Best wishes to those who opened and operated this venue and the many who just lost their positions.