Cloudy with a slight chance of Manhattanhenging tonight 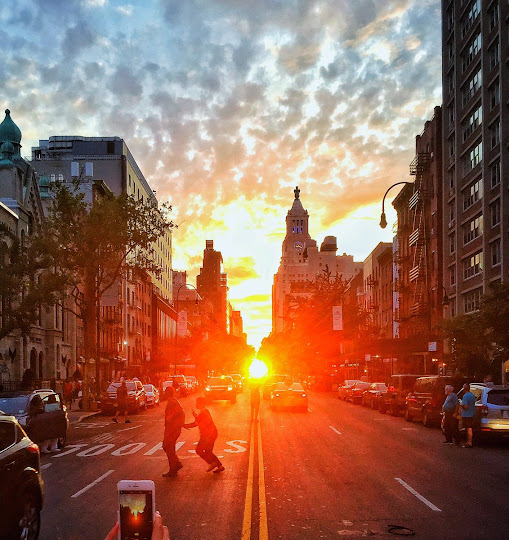 [Photo from last July by ‏@WonderlandNYC]

It is time again for Manhattanhenge, when the setting sun aligns precisely with the Manhattan street grid and #Manhattanhenge starts trending on social media.

Here's Neil deGrasse Tyson at the American Museum of Natural History with more:

What will future civilizations think of Manhattan Island when they dig it up and find a carefully laid out network of streets and avenues? Surely the grid would be presumed to have astronomical significance, just as we have found for the pre-historic circle of large vertical rocks known as Stonehenge, in the Salisbury Plain of England. For Stonehenge, the special day is the summer solstice, when the Sun rises in perfect alignment with several of the stones, signaling the change of season.

For Manhattan, a place where evening matters more than morning, that special day comes twice a year, when the setting Sun aligns precisely with the Manhattan street grid, creating a radiant glow of light across Manhattan's brick and steel canyons, simultaneously illuminating both the north and south sides of every cross street of the borough's grid. A rare and beautiful sight. These two days happen to correspond with Memorial Day and Baseball's All Star break. Future anthropologists might conclude that, via the Sun, the people who called themselves Americans worshiped War and Baseball.

Here are the dates... starting tonight...

Half Sun on the Grid

Full Sun on the Grid

However, Manhattanhenging from 14th Street — or any other of the other major cross streets — looks pretty iffy given the cloudy forecast, per AccuWeather Chief Meteorologist Elliot Abrams.

“We’re talking about something that requires the sun to be out, but we’re talking about just a very narrow window of time,” Abrams said.
Clouds are expected to be covering the New York City area [tonight]. There may be some breaks in the clouds on Tuesday evening, but a shower or thunderstorm could move into the city.

“It’s reasonable that there will be a chance to see it on Tuesday evening, but all it takes is one cloud at the right moment to ruin it,” he said.

Email ThisBlogThis!Share to TwitterShare to FacebookShare to Pinterest
Labels: Manhattanhenge

It's not that special. If your eyes are open you can see all kinds of interesting juxtapositions of the sun. Manhattanhenge is more a spectacle of groupthink than anything else, in my humble opinion.

Does someone always have to take a piss on every single post? There's a grump in every bunch!