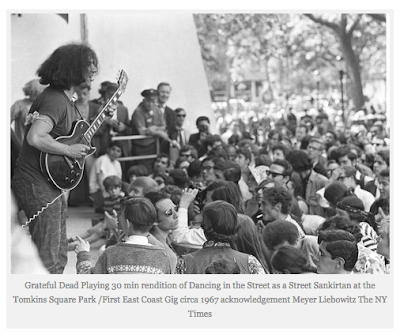 To mark this 50th anniversary on Thursday afternoon, the folks who put on the monthly Dead Night at Clem's in Williamsburg are hosting the following in Tompkins Square Park:

As for the Dead's show in 1967, here's part of a recap via The Village Voice:

June began on Thursday, and the Grateful Dead were in town, and, despite some rumble rumors from the Puerto Ricans, the prospects for peace looked promising. A happy, scruffy parade of 80 marched down St. Mark's Place, complete with police escort, to present the Dead with a white carnation key to the East Village, graciously accepted by Pigpen. And the Tompkins Square bandshell rocked with San Francisco glory until a noise complaint was lodged in the late afternoon. Rather than tune down, the Dead turned off.

Excuse me can someone explain what they mean by the offensive statement of "rumble rumors from the Puerto Ricans"??? Are you talking about "Westside Story "?

Another show took place the night before the Dead show:

"The Group Image played to a packed park Wednesday night, but there were no cops around to love. Their absence was regretted later in the evening when a group of Puerto Rican youths, upset by the hippies’ newly-won dominance of the park, rained rocks and beer cans on the musicians. The Group Image made a hasty exit."

Shame the bandshell is long gone

That was my first rock concert.

Yeah I was there that day when the "hippies" came marching into the park, midday,warm and sunny. The Grateful Dead leading the group. They were certainly a weird bunch. However they were all smiling and enjoying that day immensely.
Mr. Lopez commented his concern about the Puerto Ricans. The youths were out for blood. They didn't like this godless bunch invading their turf. Lone hippies wandering the park were routinely set upon with dire consequences.

Played in TS Park as a child, since I lived on Avenue C and 8th Street, just down the block. Still think of it as my park, and delighted to have the GD commemorated there!. Let it be a joy-filled day, with no rancor. It's MUSIC for goodness sake.

With a touch of much needed political correctiveness ...Si! I totally agree!It MUSIC for good sake!

Wish this was on a weekend so day job people like me could enjoy it.

I look forward to hearing the music !

It was a great show today. Lots of smiles and dancing by people of all ages😁😄😎

It was truly a wonderful day. With the colorful people dancing and the great Grateful Dead music, you could really feel like it was 1967 for a few hours. Who knew there were so many hippies still on the LES?

All that was missing was our fucking band shell!!