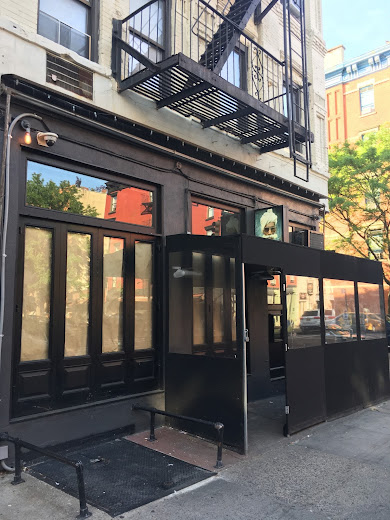 Workers have removed almost all the remnants of Babu Ji from outside the former Indian restaurant on Avenue B and 11th Street... 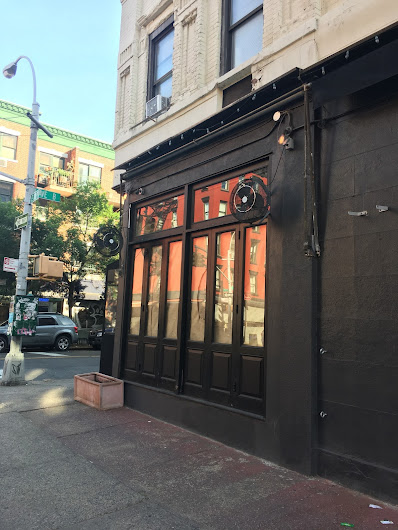 As we first reported on May 4, Sushil Malhotra, founder of Curry in a Hurry, Akbar Dawat and Café Spice, among others, is opening a new Indian restaurant in this space. We recently spoke by phone, and Malhotra said he was still finalizing details on the Avenue B space. He did promise it will be a fun restaurant.

Babu Ji had been closed here since early March following the disclosure of a second wage-theft and overtime lawsuit against owners Jessi and Jennifer Singh.

However, it appears Babu Ji will live on not too far away. An Eater tipster spotted Babu Ji signage at 22 E. 13th St. between Fifth Avenue and University Place a few weeks ago.
Posted by Grieve at 4:10 AM

I hope "fun restaurant" doesn't mean a loud one. We don't want upper Ave B to become the hell hole lower Ave B is today.

This guy knows how to run an Indian restaurant, looking foward to seeing what they do with the space. It's bizarre that Babu Ji would open another restaurant just a few blocks away, but maybe its just a legal maneuver to protect ther assets. Or maybe their asses.

@giovanni totally different neighborhood, it's not that close.

What I meant is that Babu Ji is more of a foodie destination restaurant than a place for local residents to eat and hang out in, so if their problem is purely legal one they could have moved into a nearby storefront on the same block under a new LLC. I doubt their business will be much better over on 13th St, plus they lose the cachet of being in our hip, overpriced neigborhood. If they wanted to be in a cool location then being a block off that 14th Street strip, on the other side of the same block with the Taco Bell -- isn't going to help. Not only did they pick a spot away from Bro-Deo drive, they lost the cool factor by moving away from the EV and over to Midtown South. It's a win-win since now we get a quality Indian restaurant from a guy who knows how to run a place properly, and whose food I have been eating for decades.

Giovanni, you are usually right about most things, I'm hoping you are right about the new place. I live just a block away and really enjoy Indian but Babu was too expensive and too much of a scene for me.