Report: Morton Williams won't be taking over the 14th Street Associated after all 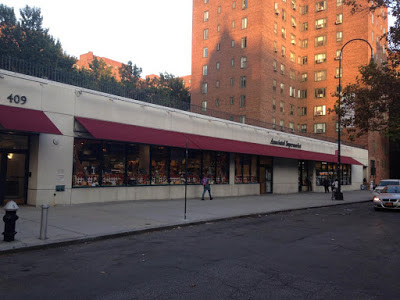 After learning that a Trader Joe's was coming to the new development at the former Peter Stuyvesant Post Office on 14th Street, Morton Williams has decided not to sign a lease for the nearby Associated, according to a report yesterday in Town & Village.

So for now, Associated will continue on here between Avenue A and First Avenue. The supermarket's lease is up at the end of the year.

Asked about Morton Williams’ decision to withdraw from negotiations, Rick Hayduk, general manager of Stuyvesant Town, said no lease had been signed. Last week, he mentioned this as well, though he confirmed there were negotiations.

“Associated continues with their lease,” he added. “No final decision has been made with respect to the tenant for this space on a go-forward basis.”

Report: New Stuy Town owner pledges to keep a grocery story on East 14th Street, but it may not be Associated

Report: Morton Williams will take over the Associated space on 14th Street (27 comments)
Posted by Grieve at 4:01 AM

The elderly people who still live in this area will have more difficulty shopping for food.
Navigating aggressive TJ crowds/lines will be difficult.
The loss of ability to purchase food is the last step in emptying the neighborhood of long-time residents and elderly people.

ha ha ha Blacktone your money grab has been squashed. Only a fool would rent the Associated space with TJ's across the street.

Just wait till the current Associated owners decide not to renew. If you open your eyes and look around Manhattan there are tons of empty/available Supermarket stores all over the place. Gristedes has thankfully emptied out as has the D'agostinos....This Supermarket Wars Shit is FASCINATING.

This is called karma folks. Be a greedy scumbag and try to kick your current tenant to the curb, who pay their bills on time and are willing to pay a rent increase for a lease renewal, find a new tenant who will pay double, then they pull out, ha! Now here is the litmus test of how greedy Blackstone is will they negotiate in good faith with the Associated or will they let it sit vacant for years? #SBJSA

This fiasco is now turning into a disaster. Between the new Target store and Trader Joe's coming in across 14th St. it's obvious that Blackstone overplayed their hand on a lease that makes little difference to their business plan. They could have easily given Associated a decent lease, instead they dragged their feet and got burned. Now they might be stuck with an empty storefront for years and the loss of a major "amenity" which they like to use in all of their marketing. Screwing over your only large grocer does not exactly make StuyTown family friiendly. Maybe they wanted to make life as miserable as possible for the seniors so they can flip those rent stabilized apartments. Either way they have badly miscalculated. Between new buildings with large retail spaces for rent and numerous grocery store closings, Associated has better options available by moving elsewhere. The fact that only one who didn't realize this was Blackstorne says a lot about their lack of knowledge about the local. real estate market.

StyTown overestimated their leverage and lost. If Associated leaves they use the loss of rent as a write off. And they don't write-off the old rent, they write-off the rent, outrageous rent. So they get something until some stupid chain comes along and thinks they can make a go of it, even as a loss-leader. God, the stupid business people - like children with too many toys.

Let's get one thing straight. I am StuyTown, along with everyone who lives here. The folks who fucked up this lease deal is BLACKSTONE, i.e. the equity group that has been here for what, all of two years. Alls I am saying is let's not conflate "Stuytown" with "Blackstone". There's good people in Stuytown.

I shop at both the Associated and Trader Joe's. I go to both stores at least once a week, and will continue to do so if given the chance.

I am Stuy Town also. I am good people also. However HA HA TO STUY TOWN

Blackstone is out to maximize ROI...

StuyTown's overlord Blackstone messed this up so bad I doubt that any supermarket will rent the Associated store now. According to Town & Village, the manger of Associated estimates that with Trader Joe's across the street, he will lose one third to oe half of their current business, making any rent increase impossible to afford. If they leave, StuyTown will be forced to find another use for the store, like a gym or another pharmacy chain, so either way they're screwed: StuyTown residents will very likely be forced to cross the street to buy groceries. Of course, man residents already have to walk almost mile just to get in and out of StuyTown, so what's a few extra blocks while lugging groceries?