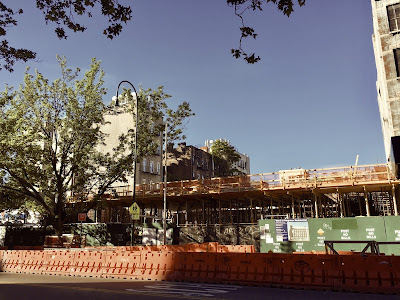 Trader Joe's has reportedly signed a deal to open a two-level grocery in the new development that replaced the Peter Stuyvesant Post Office at 432-438 E. 14th St. between Avenue A and First Avenue.

The food purveyor quietly signed a lease about two months ago with Mack Real Estate and Benenson Capital Partners ... for 8,531 square on the ground floor and 14,170 square feet on the lower level.

In May 2016, there were reports of Trader Joe's taking the retail space in Extell's incoming retail-residential complex one block to the east between Avenue A and Avenue B. Target ended up signing a lease for the corner at 500 E. 14th St. The remaining storefront at No. 500 is 14,500 square feet.

The residential entrance (there will be 114 units) to the 8-floor building will be on 13th Street... while access to the Trader Joe's will be on 14th Street. 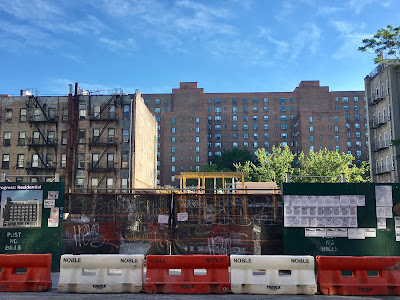 The Trader Joe's will likely have a little competition across the street with, reportedly, a Morton Williams. [Updated: Town & Village reports that Morton Williams will not sign a lease now.] Not to mention the small-format Target, which will feature grab-pay-then-go food items and other groceries.

In 2014, a Facebook group was advocating for a Trader Joe's for Ben Shaoul's condoplex at 98-100 Avenue A. That retail spot is now Blink Fitness.

Will a second Trader Joe's on East 14th Street help alleviate the pre-storm lines at the current location between Third Avenue and Irving Place?

We go to TJ's periodically, typically for some of TJ's unique products.
But otherwise, find TJ's to be a soul-crushing experience. Also though people cite low prices, there seem to be many shoppers with plenty of money, jumping into Ubers to go home.

The TJ and Whole Foods tsunami and closure of regular supermarkets appear to be the last phase in former Mayor Bloomberg's demographic cleansing of Manhattan.

According to Town and Vllage, the Morton Williams lease in Stiy Town isn't even signed yet. Now that Trader Joe's has announced they're moving in right across the street, perhaps they never will. Someone who has talked to the Associated store manager says that Morton Williams has contacted him and said they're not taking the store anymore. Given Morton Williams strategy of Every Day High Pricing, I'd be shocked if they still sign the lease to go into Stuyvesant Town. They can't compete on price, selection or quality with Trader Joe's. The only thing that certain is that Morton Williams lines will be much shorter.

I used to go to TJ's for some time and like many products that were not easily found closer but the lines were often nuts unless you got their before 10:00 am on a weekday, the other option get a push basket buddy to stand at the end of the check out line and do your shopping, with arms filled then locate your friend, empty into basket and take another round to gather more until your friend is close to the finish line. TJ's was more like participating in a TV game show than picking up a few things to have at home. I don't expect the crowds to be less at this new store with Sty Towns younger demographic and the hundreds of new apartments going up within a two block radius but at least schlepping home with the goods will be just 2 minutes vs 15. This is a welcome addition.

That Morton Williams ain't going to make it...Mark my words...

You - you mean someone is actually going to put something into the neighborhood that an old codger like me can use?!? (Hyperventilating sounds ensue.) Will wonders never cease!

The only other thing I can say is, HURRY!

Would have rather seen it go in at 14th Street & Avenue C
In that new building,,Oh well.

Would love a TJ's close to me. Would usually love to slam this as gentrification, but instead I am all for it.

I'm very happy about this. I do most of my shopping at Trader's Joe because of how much cheaper it is than every other grocery store in the neighborhood.

TJ's is a pain in the ass to do solo, but I typically go with my wife. When we get to the store, one of us gets an empty cart and goes right to the line. The other person goes around the store putting stuff into the cart as the line moves. It makes it a much easier experience and we're usually out of there in around 30 minutes.

Hopefully this new store won't be as crowded and a less stressful experience shopping at solo.

The key to shopping at Trader Joe's alone is to first shop the areas inside the aisles away from the line, then go back to the outer areas where the line is queuing and shop while you are in line. It's way too frustrating trying to cut through the line to get at certian items, but if you plan out your route you can get everything you need.

Quality items. Low prices. Great service. I've never/ever waited more than 15 minutes on line. The new store will alleviate the wait. And maybe as a side benefit, TJ will force the other chains to step up their game to compete. Welcome to the nabe... again... TJ.

As a solo Trader Joe's shopper I just get in the line and ask the person behind me to move the cart while I go shop, then I usually end up doing the same for them. TJ employees will also go pick up items for you if you are in line. Go their early, late or when it rains. NYC, glamor all the time.

"small-format Target, which will feature grab-pay-then-go food items and other groceries." This and all the Duane Reades etc. with groceries is just plain sad. Bodegas are disappearing. Hope that bill to save small business rental space gets some traction. Sad to see all the vacant store fronts for rent that were once small, local businesses. Looking at you Icon. Icon has even taken its name off the fronts of some of its storefront rentals, or at least that was the case the last time I walked past their building on 7th between 2nd and 3rd where the Ukranian store used to be.

This is great! Their beer selection is usually pretty good too...

It's going to be crazy to see how busy that stretch of 14th Street and now the stretch from A to B gets with the addition to these two big retailers. As much as I like TJs, I think the impact is not going to be pleasant.

I don't get the drooling over TJ's. The stress level is too overwhelming and I can find better, cheaper things closer. The produce is sub-par. If you're into microwave meals, I guess it's a good option.

@7:13am: Agree with you totally about Bloomberg's "demographic cleansing" - we are in the last stages of that. Most of us who are just ordinary people will need to get the hell out, if only b/c we can't afford food or rent here anymore.

As for TJ's new location, I don't shop there b/c it's always a madhouse and the line is insane. I understand the "shopping buddy" approach, but that just proves @8:55am's comment that shopping there is more like a TV game show than anything else. There is nothing appealing to me at ALL about shopping under those conditions.

I like TJ's but laugh at the commentators who do not read labels here. 95% of their Frozen/Packaged food is either too salty or pretty much highly-processed. I give them a BIG THUMBS-UP for getting people to buy into their Health-Food/Healthier Food Status. They ARE NOT.

We're talking about nearly the tip end of 14th street. East of the new TJs, 14th street is ghost townesque. So who cares if there's a little bit more traffic. Food and groceries are important business. We literally depend on them for survival and good health.

LMAO at the people for whom the name Trader Joe's triggers all kind of complaints about gentrification and nouveau richies. Guarantee your food dollar goes a much longer way at TJ's than at Morton Williams or even Associated.

My aim when grocery shopping is not to get in and out in as little time as is humanly possible. I enjoy taking a good look at what's available and making the choices that are best for me. But once I do get on the line at Trader Joe's it usually moves right along. I shop the walls as I go, grab a free sample, I enjoy myself.

There will be a huge increase in foot traffic and the L train stop at First Avenue is going to be even more mobbed than it gets now at peak times. We'll deal but this will only be the beginning because these big-name tenants will lure others.

Understand that TJ prices tend to be lower.
But thinking about the flip side, would we think it was fair if our employers decided to lower our salaries? Would we be OK if we lost our jobs so the jobs could be outsourced to someone cheaper?
There is a consequence for seeking the cheapest. And there is usually a backstory as to why something is cheaper - and the backstory is not always good.

@8:11pm: You don't have to move to Jersey, b/c Jersey is already moving into NYC.

TJ's sources their own products. They have few if any national brands that demand premium prices. That's why prices are cheaper. And any and all can benefit from their business.

@7:51 AM
You are right about there being a real cost to buying cheap and it is human.