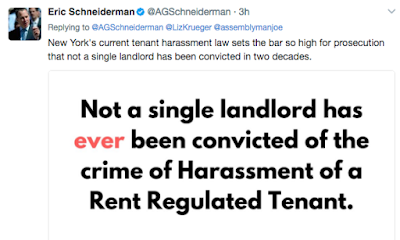 Current state law requires that prosecutors reach an inexplicably high evidentiary bar in order to criminally convict a landlord of Harassment of a Rent Regulated Tenant — which is why, in the twenty years since its initial enactment by the NYS Legislature, not a single landlord has ever been convicted of that crime. The Attorney General’s Tenant Protection Act would change that, setting a more reasonable standard that eliminates the need to prove physical injury to a tenant, and opening the door to prosecutions arising out of more commonplace and insidious tactics — such as turning off heat and hot water, exposing tenants to hazardous materials, and making rent-stabilized buildings deliberately uninhabitable for current tenants and their families.

The Tenant Protection Act of 2017 was introduced today by Attorney General Schneiderman as a program bill, and will be sponsored by Senator Liz Krueger and Assemblymember Joseph Lentol.

“The laws should protect tenants, not greedy landlords who make their buildings uninhabitable in an effort to force families out of their homes,” said Attorney General Schneiderman. “It’s clear that our existing criminal laws are simply inadequate when it comes to protecting tenants from these dangerous tactics by landlords. We must give prosecutors the tools necessary to protect tenants — and stem the rising tide of tenant harassment that is undermining affordability around New York.”

Read the full release on the bill here.
Posted by Grieve at 2:00 PM

If Schneiderman is initiating this, I have some hope that we may see some results one day.

About time. Balance the scales. Level the playing field. Schneiderman for Governor!

Landlords and landladies have being exercising Lordship over their tenants. Which practices, I hate personally. They will even compare you to replace the damage facility before evacuating the house and such like things. They will not want to spend their money for renovation. Implore you to keep your home and office clean and healthy. Do not wait for any landlord or land lady.

Bad landlord could be crazy about their house and money. Please, do not wait for landlords before you keep your environment and house clean. Because many will not give you the money nor do it for you.