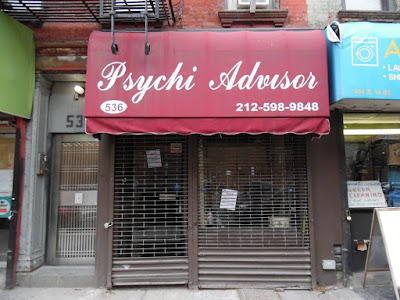 In case you didn't already see this story from earlier this week...the city slapped LES landlord Rose King with a $1.2 million lawsuit. City lawyers allege that she illegally rented multiple units in three buildings through Airbnb.

King has been hiding behind a middle man and at least nine aliases to create a network of transient hotels at 536 E. 14th St., 123 Ludlow St., and 127 Rivington St., according to the Manhattan Supreme Court suit.

And one of the building’s permanent residents told city officials that King is trying to evict rent-stabilized tenants from her properties to convert even more units into cash-cow ­Airbnbs, sources said.

Last December, as we noted, the city booted the longtime psychic at 536 E. 14th St. between Avenue A and Avenue B. City documents said that the storefront was illegally converted without "means of egress." There were also complaints on file that the landlord was operating an illegal hotel here.

As for King's alleged operation, the Post quotes the Mayor: "It's outrageous, it’s illegal, and we will stop bad actors from hurting our neighborhoods. New Yorkers can’t afford to see affordable homes turned into hotels." (Maybe someone can tell the Mayor about this on 11th Street.)
Posted by Grieve at 4:00 AM

Ironically if this landlord sold this building to a developer who wanted to demolish it for a hotel that would be perfectly fine.

Yes, the mayor gets a commission on all new condos built, isn't that right Werner?

I'm glad they're coming after this person but how 'bout they come after the assholette who rented her rent-stablized apartment via AirBNB?

A lot of people doing AirBnB strictly for the profit; I know an MHA tenant who's renting a room in his place to tourists several nights a week—although to be fair, he is on premises when he has "guests"—and as long as no one gets caught and no one gets hurt, what's the problem? (Don't answer that one.)