A Shake Shack is coming to the Death Star 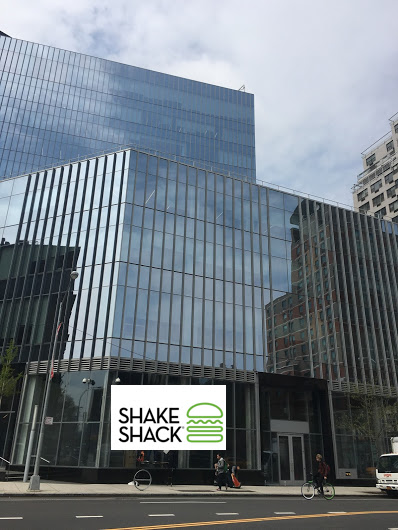 Danny Meyer’s fast-growing burger chain has signed a lease on Astor Place that will open this fall...

The new location, which will span nearly 3,000 square feet on the northeast side of the building at 51 Astor Pl., “will feature some unique design and customer experience elements,” a Shake Shack spokeswoman confirmed, declining to elaborate.

According to Lois Weiss at the Post, the Shake Shake team signed a 15-year lease.

As such, it banishes direct competitors such as Smashburger and Johnny Rockets from the building.


This will be the second Danny Meyer venture to open on Third Avenue in the coming months. His Union Square Hospitality Group is behind Martina, a pizzeria, in progress on 11th Street at Third Avenue.

The Death Star is such a sore spot in the architecture of the area. I wish they would order it disassembled and moved to Jersey City. Nothing against Shake Shack.

The Death Star is "living" up to it's name, with the addition of some artery clogging food.

Of course it is. Bland on Bland, the new Dylan paean to corporate culture.

As someone who works in JC, I don't think it would fit in here, either - unless it's here to replace the residential buildings that have the cheetoh's name...

No, I think The Death Star would work best in Midtown East, north of Grand Central. Or maybe Omaha.

As for Shake Shack, the biggest downside is that it used to be "an occasion-" either the line was too long (Madison Sq, Times Sq) or too far out of the way (UES, DoBro) for me to want to go without a special reason. It'll soon have the same ubiquity as Chipotle, and to me, it'll lose an element of 'specialness.' Oh well, so goes the way of things.

I think the "unique customer experience" will be the addition of alcohol to the menu. I don't frequent Shake Shacks but the one I've been to didn't have alcohol.

millennial affect. The Shake is there to feed the foodies/Moxies/DeathStars/millennials and the tenants of the 2 office/hotel/millennial at the north/south east corners of St. Marks and 3rd. Very smart move for them.

I'll stick to Paul's, thanks.

Continue to be baffled by the popularity of/crowds at the NYC Shake Shacks? Don't get the love...
And the fries are frozen and the buns packaged potato buns that anyone can buy.

BTW have been to Shake Shacks in other cities - and they are empty...

"Millennial effect," indeed. But this may be the point where Shake Shack jumps the shark, and becomes Mickey D's with prices on steroids. There's nothing special about waiting on an endless line for a hamburger or a shake UNLESS you're 18 years old and easily impressed.

I feel like Shake Shack is now becoming Duane Reade-like in its ubiquity. And no, Danny Meyer, I won't be adding my money to your bank account here or at your other restaurants.

Oh fuck. Here we go again. Long lines up and down the block for a fucking burger and fries. Please. Its just food. One would think these people were standing in line to meet the messiah.

Just look at Shack Shack's stock price and you realize whats going on. They peaked at around 93 in mid 2015 and have been falling ever sonce.. Today they are hovering around 38. That's called a bad return on investment. Shake Shack needs high volume urban and touristy locations but still can't compete with McDonald's or other chains because they are building a more premium niche brand. They can't set up shop on every major Interstate exit like McDs and the rest, they need cool urban locations plus airports, ballparks and malls where they can sell at higher prices points. And once you have too many of them they're not that special anymore.

The main issue is that their model is hard to scale up: their same store sales growth is anemic, the stock is tanking, meanwhile Panera and post-crisis Chipotle stock is up 25-50%. There are only so many Madison Square Parks (an ideal location where they have plenty of outdoor seating) and Astor Places (I guess everyone will be sitting around the Cube). Their Upper West Side location has had lots of complaints from the community from the lines clogging the sidewalk and all the trash. Now they have more rats in the neighborhood,

Their food quality is known to be inconsistent Every Shake Shack tastes different. And even if you're a Millennial, how long can you wait on line for a meal? Maybe you wait a half hour the first time, or the second, but after awhile that gets old. No one would ever wait that long at any other chain for a meal.

So here comes Shake Shack to help make our nice new renovated Astor Place as crowded and trash filled as possible. And with all the extra trash, here come the rats.