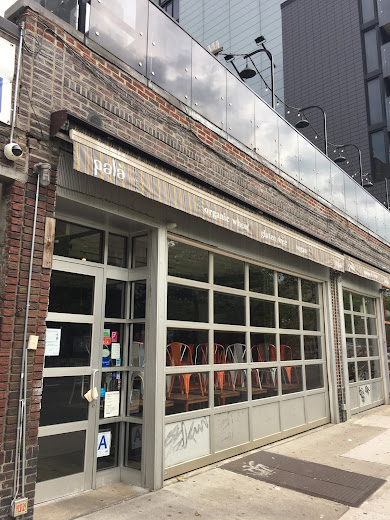 An EVG reader shares these photos... the landlord now has legal possession of Palà, the pizzeria at 198 Allen St. just south of Houston... 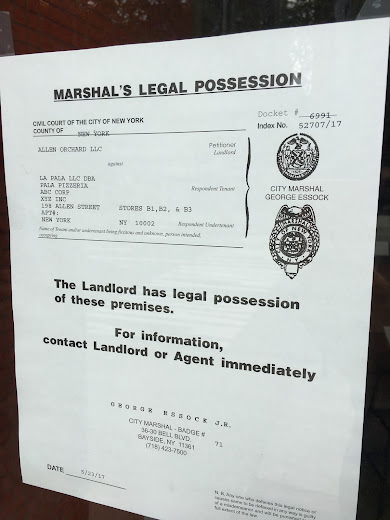 Here's what New York had to say about the place a few years back:

The dough, which consists of nine organic flours, is allowed to rise naturally over three days, and the result is a marvelously light and crispy crust. Italian owner Gigio Palazzo says he set out to “change the game of pizza in New York.” And indeed he has. Delectable combos include the zucca, pumpkin purée layered with marbled pancetta. Palazzo’s savvy gamble on unlikely toppings pays off: Of the veggie options, the bufala cruda easily tops the list, heavy with misshapen hunks of mozzarella and roasted cherry tomatoes with splitting peels.

Given the location and build-out with those roll-up garage doors, this promises to be a sought-after space...
Posted by Grieve at 5:17 PM

Email ThisBlogThis!Share to TwitterShare to FacebookShare to Pinterest
Labels: The Marshal

This place was pretty good with nice tasty flatbread pizzas, even if they jammed the tables a bit too close together. Lots of decent places around here are gone now --Sugar on the corner of Houston and Allen St. closed. They had a good breakfast menu and decent food. There was a tiny Mexican place across Allen street that also closed--you needed a shoehorn to get in there but it was festive. And that hipster Bro Bar down the south end of the block on the corner also closed down even though it always seemed to be busy. And of course we are losing the Sunshine Cinema too. But we still have Katz's Deli, or at least the foodie tourists do.