Your really last-minute notice about an HDFC working meeting tonight 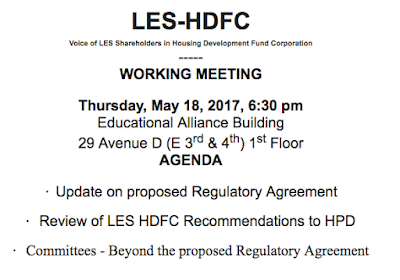 Sorry for the short notice on this... however, this meeting invite was sent out via email at the last minute... and it doesn't appear to be publicized online anywhere.

Anyway, we've had a few posts on the proposed new regulations on nearly 1,200 privately owned co-ops, including a number in the East Village.

Here's a recap from an EVG reader and co-op resident about what's happening from an earlier post:

This new proposed Regulatory Agreement is overreaching and would result in a loss of autonomy and decision-making abilities that benefit HDFC buildings, as well as costing individual shareholders hard-earned equity.

The new rules include a 30 percent flip tax on all units when they sell; the requirement of hiring outside managers and monitors at our expense; a ban on owning other residential property within a 100-mile radius of New York City; and more draconian clauses. Community meetings to discuss the agreement have been contentious and hostile, and so far not one HDFC in the entire city has publicly supported the plan. Very few HDFCs in the city need financial help and we strongly oppose a "one size fits all" regulatory agreement that will cost us money, resources, and most important, value in our home equity.

The problem was that HDP wrote the Regulatory Agreement without any input from HDFC shareholders. When we caught wind of what was happening, we were able to force a community meeting, with the help of Council Member Mendez's office. They have since held a handful of meetings but say they are moving forward within the next couple of months. They are also not giving a clear timeline, which of course has many of us panicked.

Email ThisBlogThis!Share to TwitterShare to FacebookShare to Pinterest
Labels: HDFCs