Films on the Green return to Tompkins Square Park this July 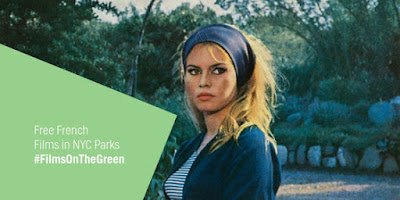 Films on the Green, a free French film festival in NYC parks, returns for another season beginning on June 2.

This year, for the 10th anniversary of the series, Films on the Green is featuring 10 guest curators, including Wes Anderson, Jim Jarmusch, Isabella Rossellini and Laurie Anderson.

Two of the films will be in Tompkins Square Park:

Find the full schedule here.
Posted by Grieve at 4:29 AM

Email ThisBlogThis!Share to TwitterShare to FacebookShare to Pinterest
Labels: Films on the Green

I love French cinema.Always a great time in Tompkins.