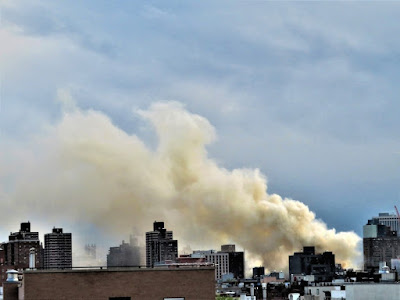 You likely saw or smelled the smoke earlier this evening... Bobby Williams shared these photos from 10th Street and Avenue C... 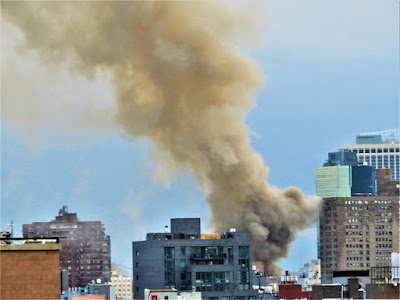 There was a three-alarm fire at Beth Hamedrash Hagadol, the landmarked synagogue at 60 Norfolk St. between Broome and Grand. The FDNY had it under control by 8 p.m. You can find more details at BoweryBoogie and the Lo-Down.

Surveillance footage shows three “kids” running from the area, the Deputy Inspector of the 7th Precinct Steve Hellman said, although it is still unknown whether they were fleeing the historic synagogue and it is too early to say whether criminality was involved in the massive blaze.

A 14-year-old boy was taken into custody Tuesday night in connection with a fire at the Lower East Side synagogue Sunday night.

The boy was charged with third-degree arson as a juvenile. He will appear in family court Wednesday.

"We do think it's arson. We think it's a purposeful fire," said Robert Boyce, NYPD chief of detectives.

Once again, the Lower East Side is burning. Turns out they have been wanting to build condos here for years, but first they would need to remove the historical designation of the building. If only they could have found someone with a bic lighter and a can of gasoline...

Well that sucks…that was where the Angel Orensanz foundation was headquartered.

I wonder if they finally get to out condos here now. Cough cough cough.

looks like they finished the job someone couldn't take care of back in the earlier fire-- 2001?

get ready for another luxury housing development.

It's interesting that the synagogue (or at least the rabbi) has been trying to get permission to demolish it, and that there was a smaller fire earlier this year (according to the linked posts). I'm old enough to remember the arson for profit days in NYC, including the EV/LES. I will be interested in the investigation results.

We've passed by this synagogue often for years and noticed something was going on this past week when we saw that the windows were open or broken. It was odd. We thought it looked like they were going to start doing something, construction-wise. Something was different.

Get Comey to investigate this one, I smell a greedy rat.

This wreaks of arson.

A work in progress

As far as I know, the Angel Orensanz Foundation is still at 172 Norfolk Street, in the old Congregation Anche Chesed. That building was a synagogue from the get-go, whereas Beth Hamedrash Hagadol, from what I understand, actually started as a church in the mid-19th century. Regardless, another irreplaceable piece has been ripped out of the neighborhood quilt.

This was a beautiful Spanish-Moorish motif structure, a rarity in the neighborhood. Do we blame Essex Crossing for flaming the real estate values around this soon-to-be high-rised sleepy community?

From the Broadway Boogie:

What better propellant than Essex Crossing?

Can "kids" get their hands on enough gasoline of highly flammable substance to get this kind of fire going?

Does arson = no insurance???

Watching the videos of the fire, it looks like the FDNY was not going to put out the fire - they were just going to be there to make sure the fire did not get out of control. To me, that is kind of contrary to what a fire department should do?

get ready for another luxury housing development.

This neighborhood is starved for luxury housing!

Teenagers starting a fire in an abandoned building...shocking!!