Against the Grain yields to sustainable omakase restaurant on 6th Street 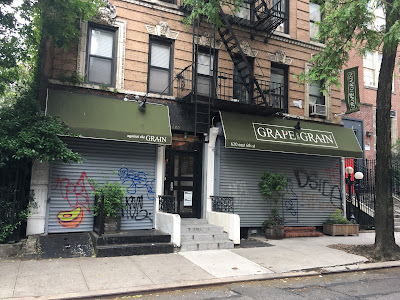 Against the Grain, the beer annex of Grape and Grain on Sixth Street between Avenue B and Avenue C, has closed to make way for Mayanoki, a sustainable omakase restaurant that has been operating as a pop-up spot in Brooklyn the past five years.

According to Eater, Mayanoki co-owners Josh Arak and David Torchiano are subletting the small space "with the expectation that it will become a long-term arrangement."

Mayanoki’s $95, 15-course menu will serve varieties such as squid, black sea bass from New Jersey, Spanish mackerel, scallops, oysters, albacore tuna, grouper from Florida, and more. The varieties will change based on what is in season and sustainably available, and the restaurant will work with organizations such as Monterey Bay Aquarium Seafood Watch and Ocean Wise to guide sustainability choices. To fit in with the local theme, there’s also an all-New York wine and beer list, though sake will be flown in from Japan.

The restaurant officially debuts tonight on Sixth Street. (They had a soft opening this past weekend.) Mayanoki is open Wednesday-Sunday, with seatings at 6:30 and 8:30 p.m.
Posted by Grieve at 4:00 AM

Email ThisBlogThis!Share to TwitterShare to FacebookShare to Pinterest
Labels: Grape and Grain, Mayanoki

Another "destination" restaurant is opening in our neighborhood, please alert the foodies.

I would ask you reserve judgement until you can come by the shop and chat with us. Our mission is to be a positive element in the neighborhood and good neighbor as well as be as approachable for as many people as possible.

If there is alcohol being served was this approved by CB 3?

Why not? It's one restaurant/bar replacing another.

I am positive that the neighborhood doesn't need another restaurant that contributes to the overall decline of character to this neighborhood.

$95 tasting menu is all I need to hear to make my "judgment" if this is good for the neighborhood. Please move uptown or to Brooklyn.

Sad to see Against the Grain close down, but excited to try you guys! Welcome to the neighborhood.

*Man I scooped Grieve on this news of Mayanoki displacing Against the Grain by weeks on Twitter weeks ago! No credit, medal, cookie, or T-Shirt for this feat? Outrageous! Jokes--calm down.

*I ran into Michael (or was it Mike) -- the omakase chef...supernice dude, just moved here and had a great energy. He brings a good vibe to the neighborhood and hopefully the sustainable omakase concept works.

* It's a two-turn omakase restaurant with 8 seats that closes relatively early--not sure how this degrades the neighborhood? It's not like there is an after-hours element to Mayanoki. When Against the Grain operated it closed at 1 or 2 am with drunken spillover...don't think this will be the case here.

*For those bemoaning the death of Against the Grain, the annex beer bar hasn't been open for almost a year (infrequently open at best). It has largely been used for private events and such. Mayanoki brings something new to the table and hopefully succeeds where ATG faded to black.

*What truly in decline is sites like Thrillist, Eater, etc. that cover food & bev news becoming a bulletin board for rewritten press releases with quotes.

a $95-reservation-only meal is approachable?

I'm cool with this. The people running the omakase are real laid back, good people. I probably won't go cause of the price, but this is as low key as it gets.