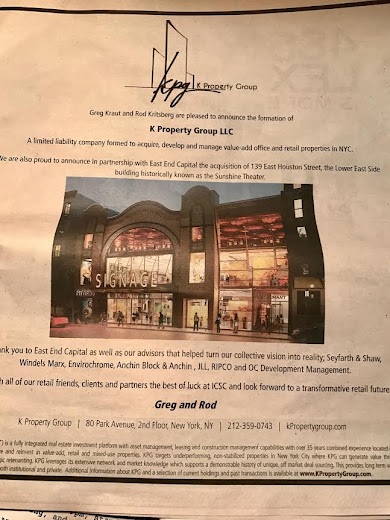 On Tuesday, the involved parties took out a full-page ad in the Post (thanks to Blue Glass for the photos)... 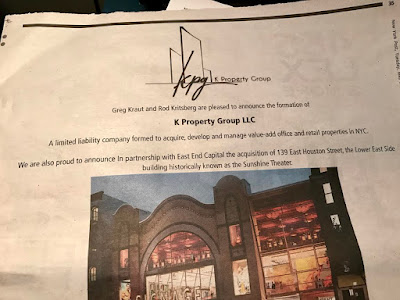 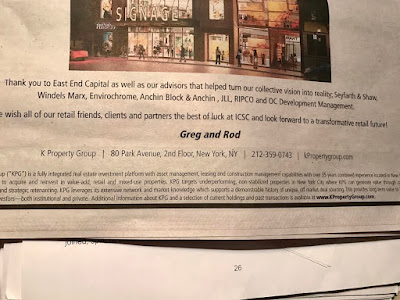 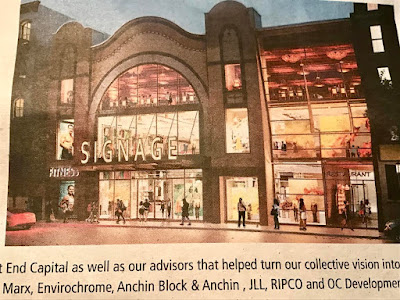 The partners say they look forward to a "transformative retail future." Given the negative reaction to news of the Sunshine's demise, some local residents likely won't be offering their congratulations.

Patch had an update last evening on the building's future:

Greg Kraut, a managing partner at K Property Group, did not confirm to Patch rumors of the theater's imminent closure, but noted that the cinema's lease would expire in 2018, and that the developers would look to fulfill "whatever the community thinks" the space should be used for.

"We have been notified that the building was sold and we certainly hope to operate for as long as the new owners go through the permitting process with the city," a spokeswoman for the Landmark Theatres company said in a statement.

The Sunshine opened here between Forsyth and Eldridge in 2001.

Previously on EV Grieve:
Report: Sunshine Cinema on East Houston to close in January
Posted by Grieve at 4:15 AM

This place has everything$10 water, bro-tinis, and Lady Guyguy. You know, the midget love child of Lady Gaga and Guy Fieri.

Greg and Rod. Their very names make them sound like tools.

Gojira, I heartily agree. "[T]ransformative retail future," WTF does that mean? Sounds like a threat.

What a dead-ass, boring-ass street E.Houston St. is.

What is this? Rubbing our collectives noses in it? Or just putting salt in the wound? Developers only care about money not the community. And the community they create is anathema to the EV.

Retail is dying faster than culture in the East Village. This place will try some "Transformative retail" for a few years and after that fails, demolish and sell bland over priced condos.