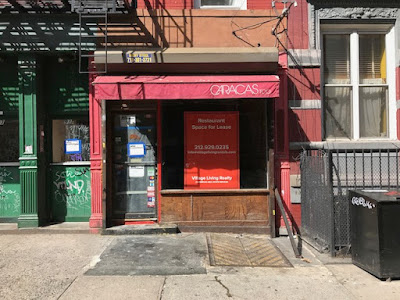 Caracas Arepa Bar apparently will not be reopening at 93 1/2 E. Seventh St. between Avenue A and First Avenue. A for rent sign arrived on the space this week.

A fire broke out here in the early morning hours last Sept. 21. While no one was injured, the damage was extensive.

Co-owner Maribel Araujovia was blunt about the damage: "The restaurant is pretty fucked up." She expounded on that to Grub Street last September:

“It’s not just a little thing we can fix quickly, put drywall up, and keep going,” Araujo says. Getting back to business will take some time: Leases and inventory need to be looked at, and conversations need to be had with lawyers and insurers. “Maybe we’ll relocate, maybe we’ll try to rebuild this one. At this point, I’m not sure.”

Workers had been refurbishing the space... with the thought/hope that it was being done for Caracas. Looks like the work is for the next tenant.

The smaller Caracas space at 91 E. Seventh St., which debuted in 2003, remains open with limited seating and to-go orders. They also have a location in Williamsburg as well as a seasonal spot in the Rockaways for the summer.
Posted by Grieve at 4:20 AM

They have the take out spot, which is great. They'll get insurance money so I'm hopeful they'll open again. No matter where.

I live next door and would always hear loud drillings coming from this rental space at 2 in the freaking morning.

I knew they wouldn't re-open. I mean, I guessed it correctly.

There is surely a lot of work that needs to be done to make the space functional and bring it up to code. It amazes me that there are restaurants in all these old residential buildings that weren't built for that purpose.

If they don't reopen maybe Harry's Burritos could return to this space.

Their vegetarian burritos were as big as a small dog LOL.

There's a decor idea - leave the burnt out interior as is, and use that as the interior.

4:17 - great idea! Let's call it Ashes to Ashes. Might be too smelly though

Looking forward for another Michelin-starred restaurant to take this place!