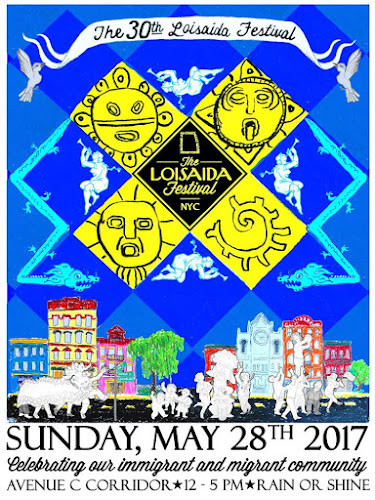 Loisaida, Inc. is proud to announce the 30th Annual Loisaida Festival, Sunday, May 28, from 11 am to 5 pm along Loisaida Avenue (Avenue C) from 6th to 12th Street. This year the Festival celebrates three decades as the largest public open-air event in Lower Manhattan dedicated to preserving Puerto Rican and Latinx culture, deeply rooted in Loisaida — Spanglish for the Lower East Side.

The 30th Anniversary Festival, which will attract well over 15,000 visitors, is dedicated to The Spirit of the Immigrant and Migrant community and their unique contributions to the Lower East Side, New York City, and beyond. Marine-combat-vet-turned actor, singer, and activist, J.W. Cortes, will return this year as the Festival’s Host and Community Ambassador.

Salsa, Samba, Charanga, Mambo, and Rock and Roll will rule the Festival’s mainstage with a lineup that brings together a magic mix of established and rising Puerto Rican and Latin American artists. This year’s bombastic musical program will feature the Legendary Puerto Rican musician, composer and producer Fran’ Ferrer, founder of Puerto Rico 2010 and Descarga Boricua.

The Festival will open at 11 am with a Carnival Parade, the result of a month-long intensive collaborative atelier on parade-making & Cabezudo techniques that Loisaida, Inc. commissioned engaging three masters in the arts of street theater — Pablo Varona, Daniel Polnau and Adam Ende — to kick-off the annual celebration.

As always the street-level experience will feature an array of vendors with delicious homemade ethnic cuisine, community organizations distributing critical health and wellness information. The Festival spotlights Healthy Living, Artisan and Eco Zones plus a fun roster of Kid Friendly activities and workshops by El Museo Del Barrio, Friends of the High Line and the Bio Bus, among others.

Find all the details here. Find photos from the 2016 Loisaida Festival here.
Posted by Grieve at 4:30 AM