Report: Sunshine Cinema on East Houston to close in January 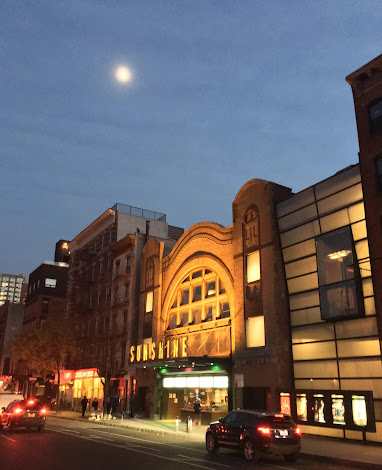 After months of speculation, the Post confirmed that the Sunshine Cinema on East Houston between Eldridge and Forsyth will close in January when its lease expires.

The 30,000-square-foot building at 139 E. Houston St. has been sold for $31.5 million to developers East End Capital and K Property Group, which will convert it to a mixed-use development with retail and upstairs office space. The site includes 20,000 square feet of air rights.

There has been speculation about the long-term health of the six-screen theater since it arrived on the market in May 2015.

Perhaps Community Board 3 set in motion this loss. Per the Post:

Landmark had a right of first refusal to buy the building and wanted to serve dinner with its flicks, but that idea was flushed after a full liquor license was rejected in 2012 by the community board.

CB3 would only approve a license for beer and wine. Here's coverage of that 2012 CB3 meeting via The Lo-Down:

Residents in attendance at last night’s meeting expressed serious concerns about the application in an area already teeming with nightlife activity. While most everyone treasures the Sunshine as a community resource, they said the idea of licensing a 700-person venue is more than a little scary. Both the Eldridge Street and East 1st Street block associations would prefer a wine-and-beer-only permit. Lori Greenberg, an Eldridge Street resident, asked what would happen if the Sunshine is sold to a new owner operating a mainstream theater showing action films and other blockbusters?

Given the air rights available here, the speculation is that the property will be developed into more luxury housing. Upon hearing the news, one EVG reader told me, "I find it hard to believe this will not become a huge apartment complex. I can't think of any large retail store that would thrive in this area."

Bill Thompson, senior vice president of theatrical sales at international arthouse distributor Cohen Media Group (who just reopened the Quad Cinema on 13th Street) told IndieWire last December: "I think everyone is expecting that the building itself is going to end up becoming a high rise."

I like the Sunshine Cinema and will be sorry to see it go. Of late, though, I've been going there less and less with the arrival of the Metrograph down on Ludlow and the recent reopening of the Quad Cinema on 13th Street... not to mention the standbys like the Anthology Film Archives on Second Street and Second Avenue plus, a little further away, the Film Forum and the IFC Center. And I always enjoy seeing movies at the Village East Cinema on Second Avenue at 12th Street. (Added: And the Angelika Film Center and Cinema Village.)

As for the Sunshine, it opened in 2001 after Landmark spent $12 million gut renovating the building that dates to 1898 (and 1838 by some estimates).

The entertainment beginnings of this building came in 1909 when it opened as the Houston Hippodrome, a venue for Yiddish vaudeville acts and films.

In 1917, the theatre’s ownership changed and the 600-seat venue was renamed the Sunshine Theatre. In the late-1930’s it was renamed Chopin Theatre. The theatre closed in 1945 and had been used as a storage warehouse into the mid-1990s.

The building was never landmarked.
Posted by Grieve at 4:20 AM

Why do new theatre concepts get liquor licenses and Sunshine couldn't? Because of all the crap bars in close proximity? This is doubly tragic as Landmark had first right of refusal. Seems fishy.

A really unique looking building and another nail in the coffin of culture on the LES. The E Houston "horrordor" keeps getting uglier.

I love movies and go to all the cinemas in the area, but the Landmark wasn't the best place to see a film. There was always some issue. I remember a couple of summers ago, the AC broke down during the middle of a film. I go to Metrograph a lot now because I like the experience and the vibe. The programming is so diverse, and I get to see films I wouldn't have thought of seeing. I also like that they have so many events with directors and other filmmakers present to talk about their work. Also, I don't think getting a full liquor license would have saved Landmark. I don't need to have a gin and tonic before I see a film.

The Sunshine is a beautiful presence on that block. It will be hard to build something people will like there. I suppose they will plop down another 188 Ludlow high rise faceless rectangular monstrosity to block out the sun. Stacks of undersized over priced "luxury" hamster cages with treadmills and free flowing organic gourmet coffee to keep the yups happy. Goodbye LES.

Lived next door at 145 East Houston for a short while in the early 90s, you can get a glimpse of what the building was like inside before the renovation in the Salt-N-Pepa video for Heaven 'n Hell (came home one evening to find the block swarming with Salt-N-Pepa fans due to the filming).

Terrible to lose the Sunshine. Sorry to see it go. Thank you for the tribute to its glory, and to the glories of the surviving theaters, EVG.

Sunshine shows good quality contemporary film. The house itself is unique, comfortable and friendly. And the location was convenient. I've spent many happy hours there in the dark around the light with the community and experienced a story. And I'll be there until it closes. For what? Another blah and useless apt. building.

WHERETHEFUCK does the "community" board, composed of unaccountable political appointees who are either aspiring politicians or persons with business interests in the area, get off recommending against a liquor permit for ANY venue that has NO history of crime or violence?

Perhaps such a license could have helped the Sunshine stay afloat, perhaps not. We'll never know. And now we'll have one LESS theatre. Thanks a lot, "community" board!!

By the way, the "community" board does NOT represent the community -- it only serves as a rubber-stamping body that facilitates hyper-gentrification of the Lower East Side....

NYC is so done, and it's really sad.

I was at one of those shows at the Sunshine when the air conditioning broke down and I still have a coupon for a free popcorn in my wallet. It's always been a fun place to see a movie but now with all the competition from theatres with fancy reclining seats it's hard to compete, especially when the Community Board makes so many knee jerk decisions based on cranky complainers. Just look at the crazy drunken bars in this neighborhood and tell me how this shitshow could get any worse? Broadway theaters sell alcohol and there are no problems. So does The Public Theatre. Sad to see it go. Whatever the planned sequel is for the Sunshine Cinema is, I'm sure it will score 0% on Rotten Tomatoes.

This is unfortunate. I recall seeing numerous independent films here for many years Lots of good memories. It is a vital part of our community. The loss of this will be felt for some time. Damn.

Yet another building that should have been landmarked a long time ago.

This sucks. It feels almost like a death. I know it sounds dramatic, but Sunshine is a vital part of our community. And the subsequent loss of it will impact those of us who frequented it for years. So sad :(

The Community Board strikes again! In their own misguided efforts to preserve a local tranquility that never actually existed (they're just old curmudgeons now!), they've effectively greenlighted another nail in the coffin of their own neighborhood. Can they please just fuck off and bequeath their $600 rent-controlled apartments to those who actually add vitality to the area?