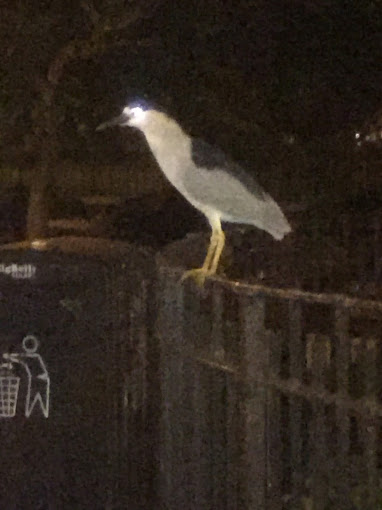 An EVG reader shared the above photo from last night in Tompkins Square Park... the return of [an elusive] black crowned night heron!

This one, with the dark markings on its back, looks different than the one(s) spotted in previous years (here and here for instance).

Here's a photo of one from last June...right before it foraged the remnants of an Açai bowl blended with banana and apple juice and topped with strawberries and granola... 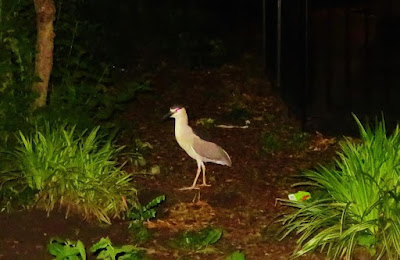 In previous years, the heron(s) returned to Tompkins Square Park in May.

Seen by day, these chunky herons seem dull and lethargic [ed note: gee, don't sugarcoat it], with groups sitting hunched and motionless in trees near water. They become more active at dusk, flying out to foraging sites, calling "wok" as they pass high overhead in the darkness. Some studies suggest that they feed at night because they are dominated by other herons and egrets by day.

Previously on EV Grieve:
The night heron apparently comes out at night in Tompkins Square Park

So according the Audubon Society they are Cowardly Herons? they wont last to long in Tompkins Square.

Anyone know what time this was spotted? I keep going out to look, but have no luck.

Why are they calling Wacky Wok?

Arrg, I still haven't seen this!

What is the best pair of birdwatching binoculars to get?

Preferably something I can tuck in my jacket pocket and possibly fold, maybe one which takes photos.

Cry for the night bird.
https://m.youtube.com/watch?v=kAsvqAZEIfs

I've seen it. It was terrifying. It looked at me. I still haven't recovered. #doom

I think they are cute

He's evil. EVIL, I tell you.
If you see one, they steal your soul.