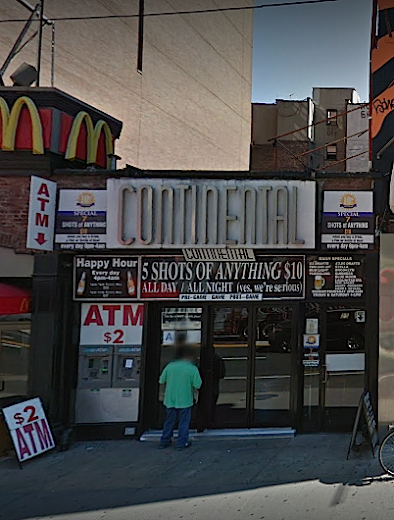 For years now the Continental on Third Avenue at St. Mark's Place has advertised that $10 for five-shots-of-anything promotion. (Apparently it has been a money loser.)

Not sure when this happened — the deal just got more expensive by $2... 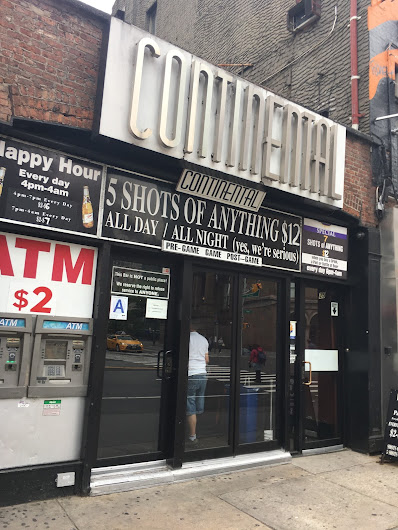 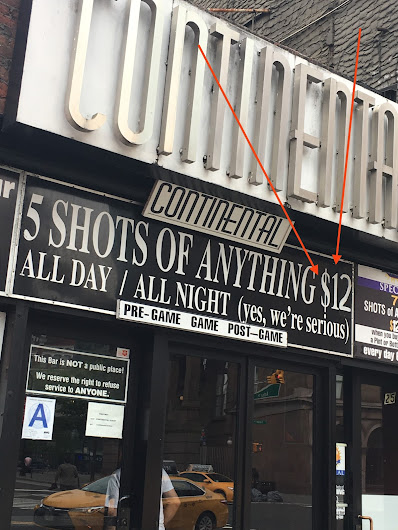 The website (rather Trigger the owner) also addresses any questions people may have about about the shot quality:

- Not only are the shots not "watered down" but this practice of diluting good brand name liquor with cheaper, generic stuff has never happened in my bar!!! Not once! Let alone as an ongoing practice.
- I understand that people can't believe the 5 Shot deal so they assume that it's got to be a scam but I can personally guarantee you that it's for real. Want to verify this for yourself???
- I've given my bartenders permission to let customers choose a random bottle from our back up stock that's in plain view and you, yourself can open the bottle and feel the seal break when you open it!!! (except on weekend nights when we're slammed but you can request this early or late on a weekend night)
- You can also order 1 or more shots from the bottle you just opened and compare it to the liquor that you've originally ordered from the already opened bottle! I absolutely guarantee that there will be no difference whatsoever.
- I don't make money on the shots. It's my gimmick to draw people in as we don't have food, karaoke, live music or any of the other things most places have one or more of. So please... come in and see for yourself!

Meanwhile, The Real Deal reported in June 2015 that real-estate investor Arthur Shapolsky was buying three properties at the corner of Third Avenue and St. Marks Place: 23 Third Ave., 27 Third Ave. and 3 St. Mark's Place. Basically everything from McDonald's to the corner. I haven't heard anymore about that since then. There's nothing in public records noting a deal ... or on file with the DOB noting new construction.

I never understood the excitement of "doing shots" rather than getting drunk the old fashion way, slowing sipping and tasting your drink, a little chatting, having another and having a choice to stop before you get shit face and wake up lying next to a public toilet.

Brahs don't roll that way, Anon. 9.19. It's all about who can get the drunkest the quickest. Hence their battle cry of "Chug! Chug! Chug! Chug!" et cetera, et cetera ad infinitum, ad nauseam. As it were.

I guess it's been decades since I've been in Continental (late 80s) because I remember food and live shows.

I liked when they had punk shows. Wonder why the shows ended.

So they're losing money on the shots, but it's a way to get people in b/c they don't offer food or anything else? That makes zero sense to me (but then so does getting skunk drunk as a hobby).

Why does trigger always sound like he's arguing with someone.

Though I'll never understand why he decided to stop doing shows almost the same time that cbgb was closed.

Mayor de Blasio, Here's a business that doesn't follow the environmental protection rules--they keep the entire front of the bar open when their ACs are running. Fine them!!

MY RESPONSE TO COMMENTS...TRIGGER
1-"stopped doing punk shows" my love for music couldn't overcome being broke all the time and having to do the door myself 7 nights a week for years just to make ends meet. I was deeply in debt when I changed the concept in 2006.just a coincidence that i closed 3 weeks before CBGB's but I was profoundly honored that the Village Voice covered both clubs closing on their cover and centerfold.
2--"so they're losing money on the shots..." has it ever occurred to you that many people buy a beer or drink with their shots?
3- "why does Trigger always sound like he's arguing?" I beg your pardon! what do you mean by that? i strongly disagree with you! you must be projecting! Me argue? NEVER!
4-"doors open with the AC on" 10 years ago i spent 5K on "Air Curtains" installed above the doorway that blow straight down to keep the AC or Heat in and the warm or cold air out. see for yourself.

ps- not making money on the shots and "losing money" are two different things.
I have never said that I lose money on the shots.
I recently raised the 5 Shot deal $2 cause my overhead has gone up and I chose to do that rather than raise beer and drink prices.

re the corner getting sold: there's always a chance that could happen but this is my 26th year and counting! Knock wood.
and I have an unusually good relationship with my landlord and have been treated great throughout.
Trigger