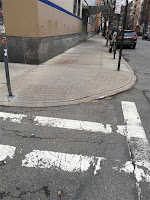 The man facing charges for slashing a social worker's face on Sixth Street in January 2016 attempted to bargain with a judge yesterday for a better deal, according to published reports.

Francis Salud, 29, balked at the offer of 14 years in prison in exchange for his guilty plea made by Manhattan Supreme Court Justice Jill Konviser even though prosecutors had argued for an additional four years and five years parole.

Salud made a desperate push for less time in the slammer, even blaming his attorney for his bad spot. He had demanded new counsel in a letter to the court.

His counter-offer was for 10 years.

Konviser told Salud that 14 years was her final offer, and gave him two weeks to think about his decision.

Around 4:30 p.m. on Jan. 16, 2016, Anthony Christopher-Smith, a social worker from Newark, N.J., was walking on Sixth Street east of Cooper Square to meet a friend when someone came up from behind him, shoved him down and cursed. His face and back were slashed in the process. Smith reportedly underwent eight hours of surgery, and needed nearly 150 stitches for the wound from his right ear to his lips.

Salud was arrested several days later at an apartment on Fourth Street and Second Avenue. He was previously arrested and charged for a slashing that happened Oct. 18, 2015. He was out on bail at the time of the second attack.

Suspect in custody for East 6th Street slashing
Posted by Grieve at 2:00 PM

Great idea for a Phone App. Post your crime and see what Bids come in for a sentence.

Let me get this right: The guy pleads guilty to a slashing he did while he was out on bail for a PREVIOUS slashing? - and then he makes a COUNTER-OFFER to the judge as to the length of his sentence? AND he has two weeks to "think it over"? WTF?!

Why does he get to say anything except "I'm sorry" before they send him to prison? This man is extremely dangerous to others, to put it mildly, and should not be walking around free.

I hope Jill Konviser is as tough with Steve Croman, he needs to go away for several years too, and his LLCs into receivership.

I am stunned that there is any negotiation involved in this. Why should this guy have a say in his sentencing?

It's Mayor Bill's New York. What did you expect.

@834 it is a plea bargain. Instead of having a trial he agrees to plead guilty to the agreed upon time. So he can refuse the deal, plead innocent, have a trial, and if found guilty then he will be sentenced without negotiations.

This brings back bad memories since there were several random slashings around that time, Not to worry, this guy been on Rikers since January, 2016 as his case plods slowly through the courts. There was no way they were going to ever let him out on the streets to slash anyone again. The Judge is telling him to take the 14 years or else go to trial and get 25 or 30. Let him try to "bargain." That way he won't get out until he's a senior citizen, and by then the East Village will be unrecognizable anyway.

I'd love to know how diBlasio figures in this in anyway. He's a great mayor. People who hate him are racists and real estate lobby people. He's doing a lot for the RESIDENTS of the city who aren't in the top 20 bracket.

I'm not in the top 20 bracket, not that I actually know what that means. But please 10:24, name a few things he's done and I'll let you know how it's affected me because I'd sure like to know.

People are seriously blaming diBlasio for the concept of a plea bargain??? That was a little TOO much blow you did back in the day.

This is a repeat offense slasher?

How about here's our only and final offer:
- life sentence, no parole