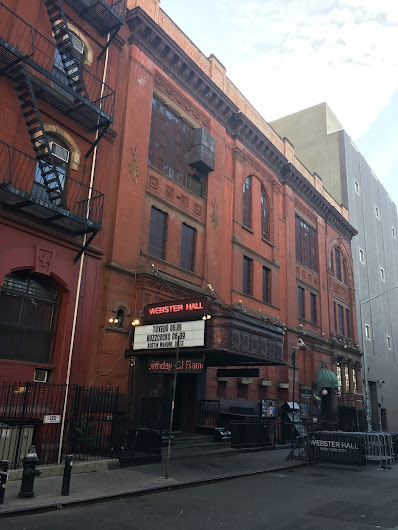 As the Post reported back in April, Webster Hall was changing hands in a deal worth some $35 million.

Barclays Center’s corporate parent, Brooklyn Sports and Entertainment, is teaming with AEG-backed The Bowery Presents to take over operations at the iconic music venue, whose stage has been graced by the likes of Frank Sinatra, Elvis Presley and Tina Turner.

Brett Yormark, chief executive of Brooklyn Sports and Entertainment, told the Post: “We’re going to preserve what Webster Hall means to the consumers and artists, but we will contemporize it.” Expect food and beverage upgrades, with possible bathroom enhancements.

Jay Marciano, chairman of AEG Live, told Billboard they will spend about $10 million renovating Webster Hall's Grand Ballroom, The Studio and The Marlin Room spaces "to bring them up to contemporary standards and add a few more customer features."

So when will the current iteration of Webster Hall close? There hasn't been any announcement just yet. An EVG tipster said that it will close starting Aug. 9. The last club event is listed online on Aug. 5. The last concert date is listed on Aug. 8 (Michelle Branch: The Hopeless Romantic Tour). Fall shows have been moved to other venues...

As for food and beverage, reps for Spectrum Catering and Concessions were on this month's CB3-SLA docket for a new liquor license. The 25-year-old company provides concessions for a variety of venues and festivals nationwide. In NYC, they manage Terminal 5, the Music Hall of Williamsburg, Rough Trade and Brooklyn Steel.

Meanwhile, another tipster wondered what might happen to Webster Hall's 250-plus employees, who are not represented by a union. Will they have opportunities to work at the new Webster Hall?

The Ballinger family has owned and operated Webster Hall since 1989. Some history of the building via Billboard:

First built in 1886 by architect Charles Rentz, the venue served as a social hall for the Lower East Side’s working-class and immigrant population throughout the Great Depression before becoming an internationally-recognized music hall. It was purchased by RCA Records and operated as a recording studio and acoustically treated ballroom in the 1950s and '60s and then became a full-time concert venue known as The Ritz beginning in 1980.

I loved the Ritz...Webster Hall not-so-much.

I predict a giant sports bar with 2 dozen screens showing live and taped sporting events, endless nachos and shots and a new glass and steel facade to match the Moxie Hotel across the street.

One of the best things about Webster Hall is its beautiful run-down glamour which enhances its historic feel for me. If they lose that and become bright and shiny and (god forbid) touristy, they'll lose me.

The RItz was great, I saw Kraftwerk there performing We Are The Robots, and when the curtain opened there were 4 mannequins standing at the keyboards next to their 4 human band member counterparts, and for the first minute or two you couldn't tell the difference. The great thing was you stood up on the floor and so everyone could dance. Webster Hall was good at first, but was so poorly maintained and grungy I bet it will require teams of experts working round the clock to get rid of the decades of crud, stench and grime. When they are done with the place it will just be another Hard Rock Cafe or BB King's style tourst venue for the Moxy Hotel crowds. They should just just rename it Hipster Hall. Welcome to Bro-Deo drive.

"Many a morning after sitting all night in taverns or coming from balls at Webster Hall, I went to an early morning mass at St. Joseph's Church on Sixth Avenue and knelt in the back of the church…" From "The Long Loneliness," by Dorothy Day (1897 - 1980)

@11:19Am. Elton John just said that music died with the MTV generation, and that Gen X and Millennials aren't real artists since MTV made it all about creating an image over making great music. Even Elton John hates Millennials.

Hope they revisit the girls free Thursday nights and get rid of that.

RIP Webster Hall. No way The Studio and Marlin Room reopen. Live music in smaller spaces don't pay the bills, not after you've plunked down 35M for the building.

They'll have WH revert back to being just the Grand Ballroom with the rest of the venue being more space for events in the GB.

AEG Live and Bowery Presents are acquiring Irving Plaza, Gramercy Theater, and Le Poisson Rouge away from owning and controlling ALL the big live music club venues in Manhattan save Hammerstein Ballroom.

Why play Hammerstein Ballroom when you could play same-sized Terminal 5 for a bigger cut of the door?

Why play 1100-1200 capacity Irving Plaza when you could play 1500 capacity Webster Hall for a bigger cut of the door?

Why play 700-800 capacity Gramercy Theater when you could play Webster Hall where even if you admitted 500 people for free you could still admit 1000 paid people or 200-300 more people than Gramercy Theater could admit? Theoretically Webster Hall could sweeten the pot by giving an artist a cut of the bar and a better cut of their merchandise sales on top of the door.

I could see AEG Live offering to buy Irving Plaza and Gramercy Theater from Live Nation NYC thus put LNNYHC out of business.

Just what we need. Another venue selling $18 Budweiser drafts with clean restrooms. Fucking shoot me now.

Webster Hall has been an overpriced shithole for years, they're just taking it to the next level.

Brooklyn Steel's capacity is over three times he size of Bowery Ballroom and the Marlin Room. It's even larger than the ballroom at Webster Hall. Doubt it will be suitable as a replacement for bands playing 500 cap venues.

I'm sorry to hear that the workers were terminated. Every employee I ever dealt with there, including the last show I saw in early May, was on top of doing their job and making sure rules were kept, but they were friendly about it. I dread this renovation. Big Corporate Money is going to ruin it, like it ruins everything.

Yours too, hon, yours most of all. If it's so tiring for you, maybe you could go check out another blog.