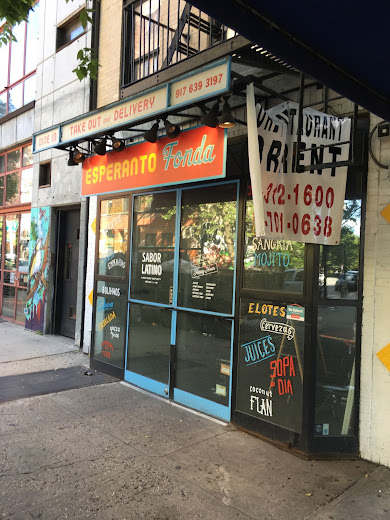 Esperanto Fonda, the satellite location of Avenue C mainstay Esperanto, has closed on First Street between First Avenue and Second Avenue. A for rent sign now hangs on the right side of the entrance.

The quick-serve restaurant, which opened last August, served a variety of tacos, empanadas and burritos.

An Esperanto rep said via email that "Fonda closed due to high rent costs but will be reopening at another location in the near future, with the same exact program." In the meantime, the rep said that Esperanto is set up for to-go window service and delivery with the same menu as Esperanto Fonda.

The First Street address was most recently home to BARA for two years and Prima for three years. The Elephant, a Thai restaurant, was previously here for 17 years.
Posted by Grieve at 4:22 AM

I wanted to like them, but they just weren't very good.