'Zhe Zhe' is 'Back from the Dead' tomorrow night 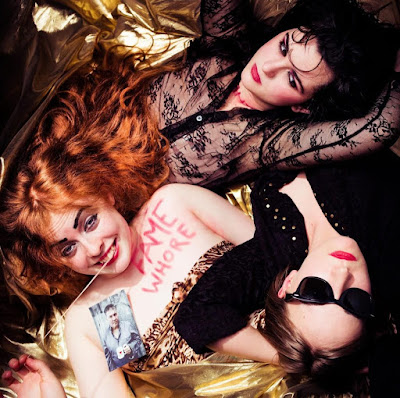 "the glamorous misadventures of three fame-famished posers in a post-reality New York. Created by stars Ruby McCollister, Leah Hennessey, Emily Allan and director E.J. O’Hara, 'Zhe Zhe' offers an unflinching look at the dystopia that has become our reality."

Mickey Boardman had this to say about it at Paper: "The show reminds us of old school East Village performance mayhem from the likes of Dancenoise, Alien Comic and any other act that used to play at La Mama."

Allan was born and raised in the East Village.

"It's definitely inspired in part by my childhood memories of ye olde East Village aesthetics, while also poking fun at our present culture of hyperbolized downtown mythos and manufactured nostalgia," she told me via email.

The screening of episode one, titled "Back From the Dead," is tomorrow night starting at 7. Howl! Happening is at 6 E. First St. between Second Avenue and the Bowery. Find out more about "Zhe Zhe" here.
Posted by Grieve at 4:00 AM