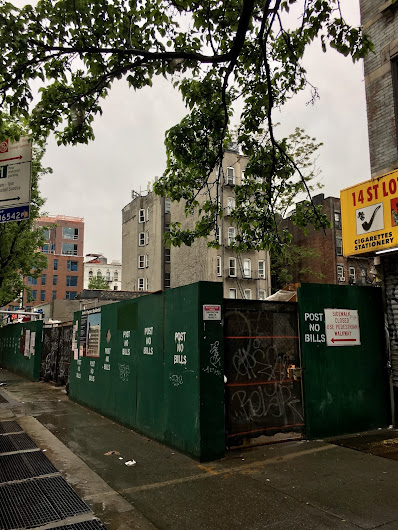 The foundation appears to be set at the 8-story retail-residential building for 432-438 E. 14th St. This photo shows the workers at ground level now here between Avenue A and First Avenue... 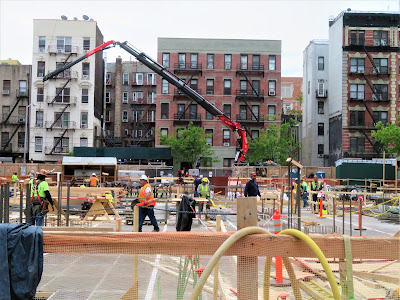 Reps for Benenson Capital Partners and Mack Real Estate had been lobbying to receive a zoning variance for a 12-story building — four more floors than the area's zoning allows — at the site of the former Peter Stuyvesant Post Office.

Facing opposition from community groups and residents in previous meetings, the developers cut back their request by two-thirds. Their new proposal sought nine stories on the East 14th Street side of the building, one higher than the eight allowed under the current zoning.

The developers had claimed that the property "is burdened by a combination of unique conditions that result in practical difficulties in complying with the applicable zoning regulations."

Specifically: "Unusually elevated groundwater levels and exceedingly soft and unstable soil (owing to the presence of an underground stream) ... result in extraordinary construction costs, which make a complying development with affordable housing infeasible." (An analysis of the project put the extra construction costs due to the substandard soil at $8.8 million.)

However, in March, they withdrew their request for the extra floor.

The pile driving started here last May. Crews for the new developments at 500 and 538 E. 14th St. likely encountered similar "soft and unstable soil," as foundation work lasted lasted more than a year.

A look at the new building coming to the former Peter Stuyvesant Post Office property
Posted by Grieve at 4:17 AM

I can tell you that there is NOTHING unexpected about the ground water level here. Anyone who complies with the New York City Building Code and performs a subsurface investigation (ie: borings, what sometimes gets called "soil testing") would have known this. Any developer worth their salt would have had one done. Unless, of course, it was done by some hack who got a PE license out of a cracker jack box.

Even if you only went by maps, go to the map room of the NYPL at the Lions and ask for the 1865 Viele Map. This is a fantastic map showing the Commissioners Plan of streets overlaid on a combination of the land of Manhattan before development (showing marshes, waterways, etc.) and the filled or made land.

At this location, there *was* a stream running right through their site. But, they should have known about this before they even purchased the property. There is this thing called Due Diligence. It was not a changed condition.

Signed,
A Geotechnical Engineer whose company did NOT do the subsurface investigation for this project.

Here's a link to the Viele map: http://www.davidrumsey.com/luna/servlet/detail/RUMSEY~8~1~2289~180029:Sanitary-&-Topographical-Map-of-the

Wow, so you mean they were able to build a solid foundation without that variance? Could that possibly mean they were - gasp! - faking their hardship claim, so they could profit further from their hideous building? The mind boggles! (Quick, what classic sci fi movie is that last sentence from? A deluxe acai bowl to the first person with the correct answer.)

Or, Nature is to blame. (Damn stream!) And, I hear, she is being blamed for climate change. Not overbuilding, overpopulation, or overzealous idiots.

But I bet there'll be an extra floor added surreptitiously -- and once that is done, the city will do nothing, since we have a mayor-in-the-pocket De Blasio.