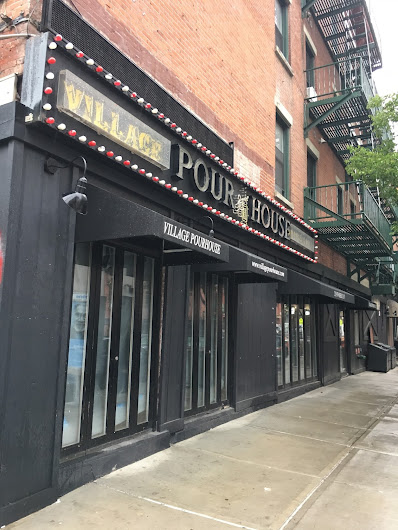 After 10-plus years in business, Village Pourhouse, the pub-crawling hosting hotspot on 11th Street and Third Avenue, closed its doors in early April.

From the outside, the place looks pretty much the same, though the Pourhouse neon has finally been extinguished. This video is from April 22...

Also, as this photo by EVG reader Arin Gilbert shows, someone tagged the Third Avenue side last Thursday night/Friday morning... 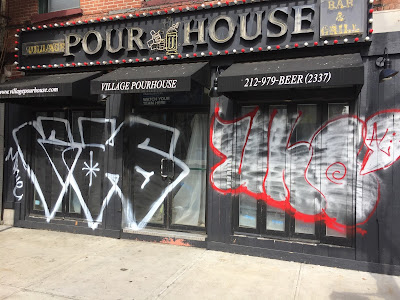 A rock club called E.Vil was reportedly expected to open in the space this spring.

To date, this item hasn't shown up on the CB3-SLA docket for a new liquor license. (And there aren't any work permits on file with the DOB for alterations, etc.) This new venture via, among other partners, club owner Richie Akiva, is "where you go to hear Aerosmith, the Clash, Guns N’ Roses, Led Zeppelin, ’80s/’90s rock, the Cult," one source told Page Six back on March 20.

E.Vil's Instagram once noted an April 17 opening date. (The account, mostly iconic photos of everyone from David Bowie to Johnny Thunders to the Sex Pistols, has been quiet of late. No new posts in five weeks.) But the account does now show a June 1 opening date...

Previously on EV Grieve:
E.Vil is coming to the East Village
Posted by Grieve at 4:01 AM

I cannot image who is the target audience for this themed rock bar. Fans of that group or artists are in their 50's and older and highly unlikely to go to a place like this having lived through the real thing. Have bar owners finally run out of kitschy concepts to entertain their millennial clients? I predict a very short life for this place which would be a delight.

At least the name is accurate: evil.

Maybe they've been reading the comments about their venture on this blog, realized how stupid the idea was, and threw in the towel?

They didn't learn the lesson that rock n roll bar that closed on Avenue A learned recently: the new residents of the East Village aren't jonesing for rock venues celebrating the icons of the past.

I bet Gojira 10 bucks those tags ARE part of the new design. In any cae they are far more "authentic" than whatever they plan to do. Obviously EBay is sold out of Farrah Fawcett, Devo and AC/DC posters and that's what is causing the ig delay. It might not be an authentic Rock bar, but a boatload of toursists who will be lured into this Evil establishment will have no one to blame but themselves after they get ultimately get rolled.

its like one of those kids halloween costumes from the early 80s where the costume was a mask and then a picture of the dude you were supposed to be on the shirt part.

Something similar existed for about two months on the southeast corner of Sixth Avenue and 13th Street. Whenever I'd walk by, a video of The Who's last concert from 1982 was playing on its screens (good show, btw, with a monster performance of "Eminence Front"). Then one day, everything was dark. A succession of dumb concepts failed at that corner, but the current one is thriving: Chipotle!

Next time I am on the L train I will ask a millennial with ear buds what they are listening to, my guess is it won't be anything the bar is planning on playing.

Don't worry, at the rate we're going we'll have a "real" Hard Rock Café in the neighborhood soon enough.

It's amazing to read the comments on this site... how little you all know about actual hospitality industry. Half the places you predict to be "closed in a month" are the busiest places around. We'll see about this, but obviously none of you understand what type of bar this will be and the clientele it may cater too.... talking about millenials not likeing rock and rock bars closing. Get a clue.

@12:08AM. Hilarious. Please name these wildly successful places that you claim people predicted would close. If you haven't noticed, most of those places have closed or are struggling due to a combination of bad concept, bad management and ridiculous rent. The rents make it almost impossible for any place to be ridiculously successful as you claim. But E-Vill looks like another tourist trap that is doomed to fail from the start. They have not even secured the required permits or updated their Instagram, and the storefront looks like a bombed out 1980s abandoned building, so maybe they got a clue and abandoned ship.

Remember "Merica? That terrible tourist trap with the racist Kanye Chicken Sandwiches and tacky decor? We all predicted it would close within 3-6 months. It closed in less than a month. Remember Empire Biscuit? We predicted it would close because of the way the owners were catering to drunks and a fad foodie craze instead of something the neighbor hid actualy needed. The foie gras biscuit nonsense didn;t help their abuse either. They closed and are still Peelin' Potatoes. And lets not mention all the speakeasy pizza places and Next Big Things on the Bowery. All closed. The EV needs stores that people who live here will use every day, not corny tourist traps and foodie flameouts.