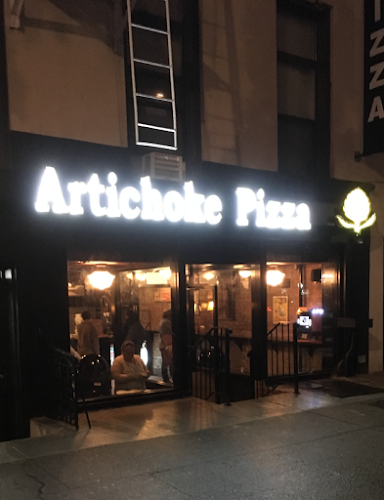 EVG reader Pinch shared this photo from tonight... the pizzeria opened today at 321 E. 14th St. between First Avenue and Second Avenue ... leaving behind their (now fire-damaged) home of nearly 10 years across the street.

Arthur Bovino at Best Pizza NYC noted the possibility of this opening earlier today. As for the new space, he writes that it's "about six times the space for customers, and about 15 times more room for the Artichoke crew to sling their signature pies."

That Artichoke Pizza sign is so bright that airplanes will now be able to land on 14th Street in order to allow tourists to avoid Queens and get to the part of the city where they actually want to go.

I will never really understand this place. The pizza is sludge, the recent fire makes me feel hinky and weird, and the idea that they're now franchising has bad news written all over it—please know I'm not saying I want potential/future franchisees to fail, but I AM saying they almost definitely will, because gelatinous fat-bomb pizza has its limit that has probably already been reached. The Artichokes just give me the creeps, man.

How nice...up and running in such a short time, new sign and place, better location.

@Giovanni, the bright lights will also help the bleary eyed drunks find it.

That pizza is not good.

Maybe they could host a fundraiser for all of the tenants who lost their apartments across the street because of the fire, or start a fund and donate a portion of their proceeds. All of those people need help. I don't know how they are going to find affordable apartments in this market let alone replace their belongings.

I really have no idea how I entertained myself during lunch before I found this blog. You people are all hilarious in a predictable kind of way. Thank you!

The artichoke bluebird op has devastated nyc by wiping it out