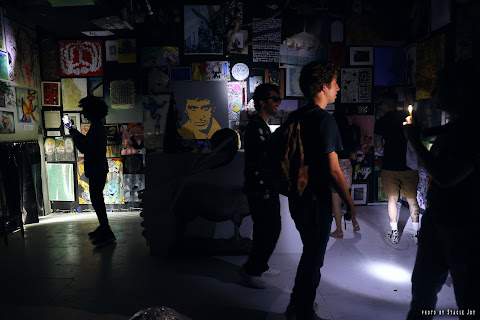 Images and reporting by Stacie Joy
A large crowd prompted the NYPD to shut down a new art show on its opening night on Avenue C and Fourth Street.
The action occurred last night at O'Flaherty's, the 10-month-old gallery at 55 Avenue C.
"The Patriot," the latest exhibit via curator Jamian Juliano-Villani (seen below early last night), was an open-call show where all work from artists was accepted — as long as the art met size criteria (under 36x36 and no wet oil paint). 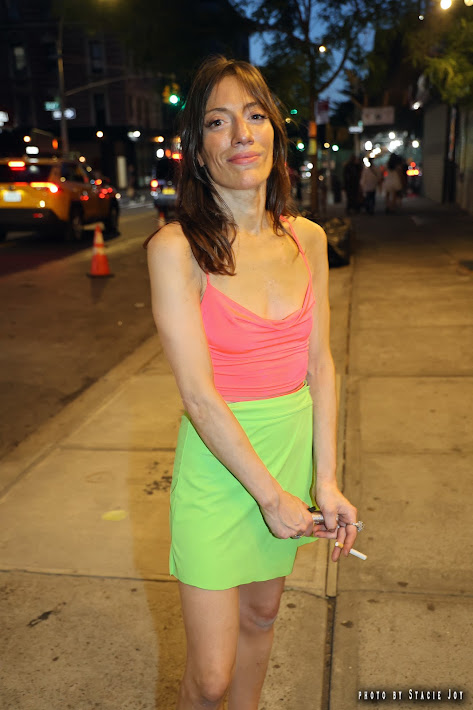 In total, there were 700-plus pieces mounted floor to ceiling, crammed into every nook and cranny of O'Flaherty's. Inside the darkened space, gallery-goers were given mini-flashlights to explore the work.
EVG contributor Stacie Joy was among those who viewed the exhibit before the NYPD arrived.
First, the art... 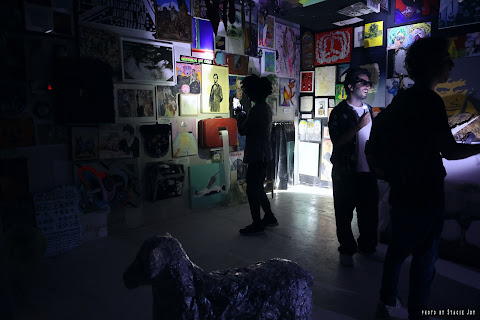 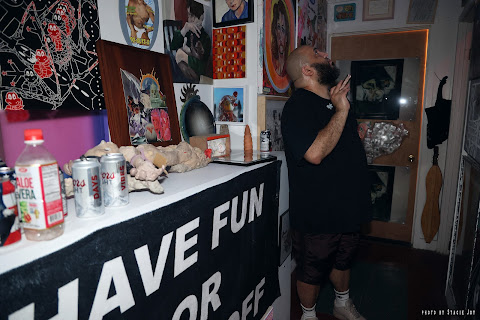 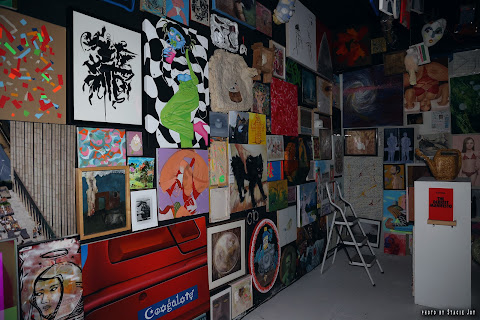 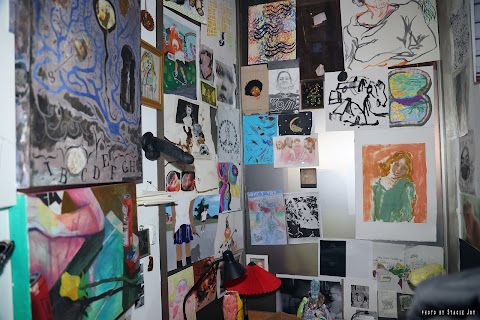 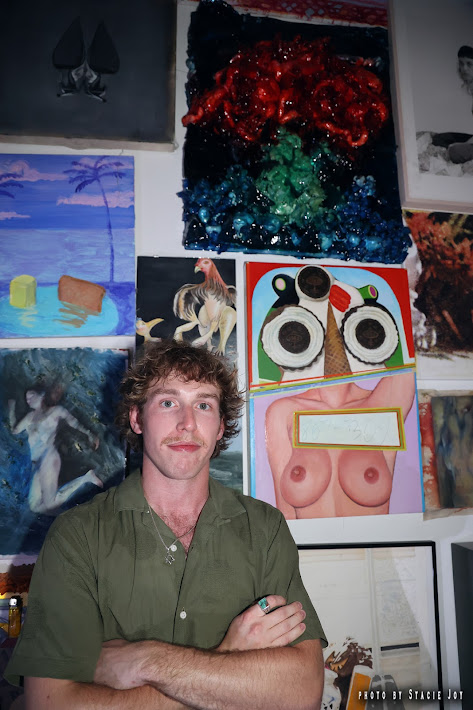 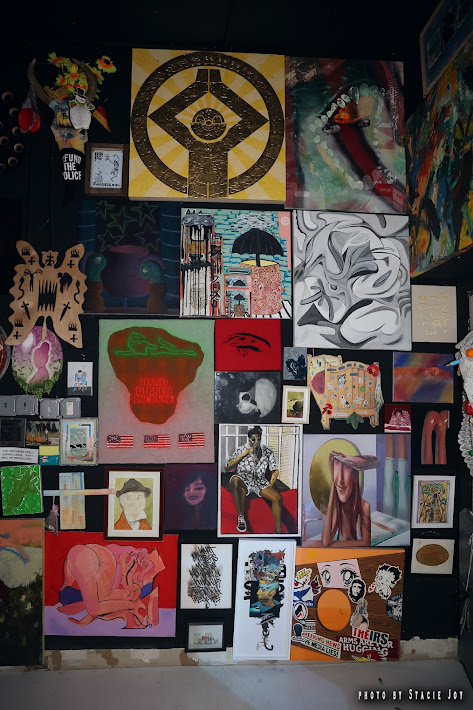 With 700-plus artists with works inside, some 700-plus people showed up for the opening. A spirited group assembled ("like a sneaker drop," per one passerby) to see "The Patriot," with a line to enter winding up Fourth Street back to Avenue B. One estimate put the crowd outside at 1,000.
The NYPD, with officers from the 9th Precinct and PSA4 (on Avenue C at Eighth Street), showed up at the gallery to shut down the opening. One officer called the crowded show "a safety issue," not to mention gallery-goers spilling onto Avenue C... 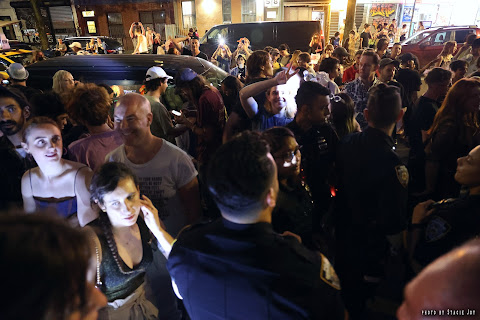 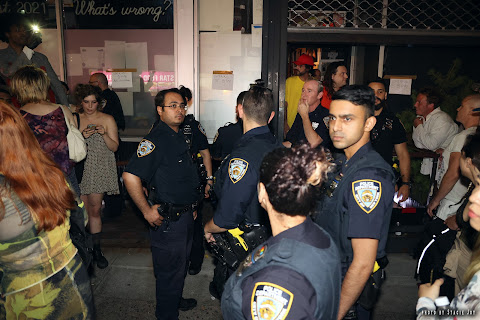 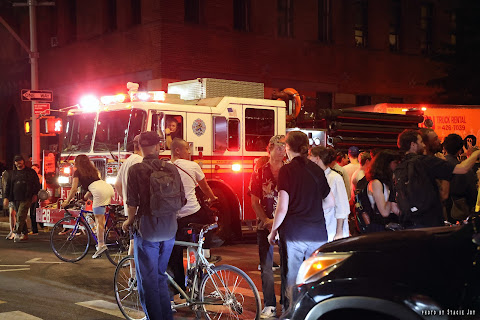 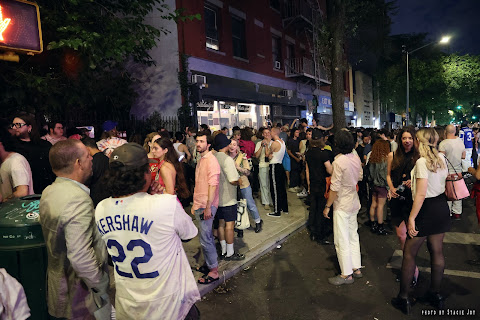 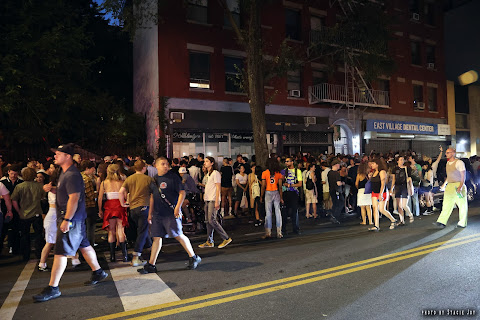 The show was expected to be up through the first week of August. Gallery hours are 2-8 p.m. Thursday-Sunday.
Posted by Grieve at 11:00 AM

Jesus Christ. WTF. Total shit show. And I live just down the street.

Good for you NYPD. If there had been a fire or a mad dash out people would have been injured or killed. Thanks for (Finally) doing your job.

Fantastic. The East Village showing it's beautiful roots. Thanks for covering! I'm in LA at the moment and thrilled to see this! And of course- Thank YOU Stacey Joy for your always fabulous photos.

lots of cool art in the pics!

Great photos Stacie Joy and EV Grieve
It was
Out of the Ball Park
New York moments!!
Thanks Jaimian, Billy and the crew

And Thanks to all the Artist, I look foward to seeing this "One of A Kind" exhibition. Curious to see where my "Blue Moon" painting ended up! By the way I was told the local Deli's ran out of beer, haa Wow!