Interview and images by Stacie Joy
For 22 years, from 1979 to 2001, 605 E. Ninth St. between Avenue B and Avenue C served as the home to the Charas/El Bohio Community & Cultural Center.
As Village Preservation noted:

Unfortunately, the abandoned building, the onetime P.S. 64, has sat in disrepair for more than 20 years. (See the end of the post for more background.)
Workers recently removed the plywood from the Ninth Street side, revealing artwork from the days leading up to Charas’ eviction in 2001, including a drawing by longtime East Village-based artist-illustrator Seth Tobocman (above).
The art reads:

A 7-year-old drew this picture at a class here at Charas. The boy was upset because he and his family had found the body of a woman who had been decapitated on their doorstep. That was in the 1980s when they called the Lower East Side the warzone. Now all of N.Y.C. is a warzone. The world is a bad neighborhood. We need cultural centers like Charas more than ever to keep our sanity.

We reached out to Tobocman to learn more about the piece and the story he referenced in the painting.
How did it feel to see your recently uncovered work in front of Charas? When we first sent you the image, you expressed surprise at seeing it — it had been under plywood for 20-plus years.
When EV Grieve first contacted me, asking me whether I had a mural at Charas, I said “no” because I had completely forgotten about this project. But when I saw the photograph, I immediately remembered it.
It is strange that this artwork was covered over with plywood to emerge almost intact 20-plus years later like some kind of time capsule, and it makes the past seem close and far away at the same time.
Can you tell us how that work came to be? Why did Charas invite you and other artists to paint the walls outside the building?
We painted these murals — with Charas’ permission — because the building was facing eviction, and this was a form of protest. Our group, World War 3 Arts In Action, was an artist collective formed to provide signs and banners for the protests against the invasion of Iraq. It included Christopher Cardinales, Sharron Kwik, Samantha Wilson, Carlo Quispe, Diane Jarvis, and others.
We volunteered to paint these murals ... We started in the afternoon and continued into the evening. Eventually, the police stopped us saying, “No graffiti!” out of a loudspeaker. We did not consider this to be graffiti because we had Charas’ permission. We complied with the police order to avoid creating an incident that might reflect negatively on Charas. 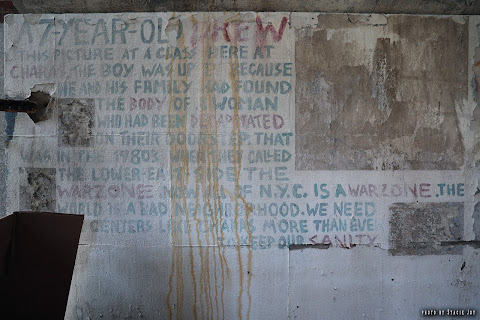 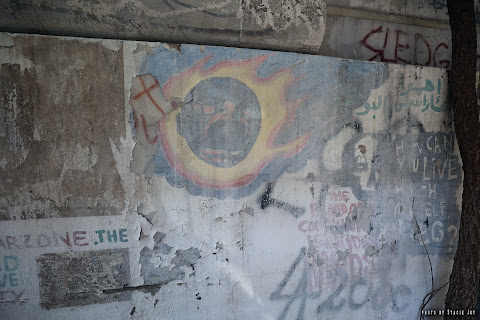 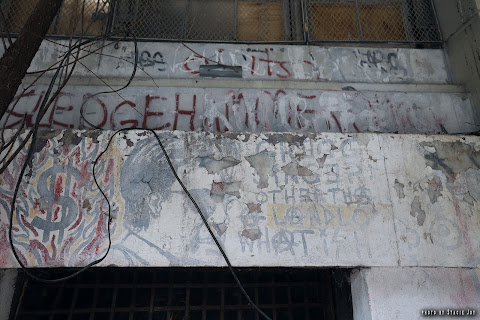 Can you walk us through the story of the child’s drawing referenced in the work? You’ve held on to that piece since the early 1980s. How has it informed the art you created at that time?
In 1983, an older community organizer, Fred Siedan, started the art classes at Charas with Lupe Garnica’s nonprofit, Chicana Raza Group of the Performing Arts, acting as an umbrella organization and occasionally providing a very small amount of funding.
A number of artists were concerned about the role of art galleries in gentrifying the Lower East Side. We wanted to find positive ways for artists to work with the community. Eric Drooker and Paula Hewitt Amram had organized a tenant union called Angry NOHO Tenants or ANT.
I was involved in a rent strike in my building. Sabrina Jones was working with a feminist art group called Carnival Knowledge that had studio space in Charas. We all worked on the magazine World War 3 Illustrated and did political postering and stencil graffiti in the neighborhood.
Seidan invited us to teach classes. He said the real purpose of these art classes was to keep the kids away from the drug operation, which dominated the blocks around Charas. Parents would bring us all their kids, from toddlers to teenagers.
Classes were very orderly because the older kids kept their younger siblings in line. Kids liked the classes so much that sometimes I would be walking through the neighborhood, and a group of children would stop me and ask, “When are we gonna have art class again?”
One day I walked into class and saw this group of very small children sitting in one corner talking quietly to one another. Now that’s unusual, small kids talking quietly. So I listened in. The kids had found the body of a woman who had been decapitated. They were telling each other about this. Trying to describe it. Trying to figure out what it meant.
I was fascinated by their plain but forceful language, without adjectives, value judgments or cliches. One of the kids eventually painted this wild picture of a screamy-faced woman. At the time, I was trying to do political art, but my real influences were comic books and science fiction illustrations. I really had not found my voice as a writer.
After hearing the kids, I resolved to learn to write the way they talked and to draw the way they drew. The result was an account of my own witness to violence on the streets of New York called “I Saw A Man Bleed To Death,” which was the beginning of the art and writing style most people associate with my work. I owe a lot to those kids. 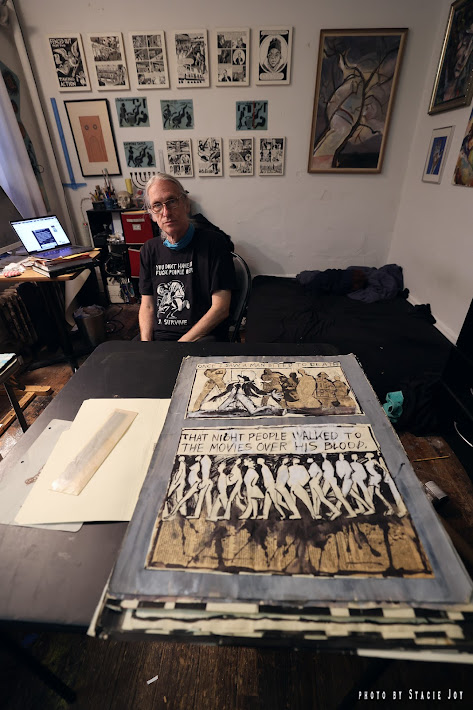 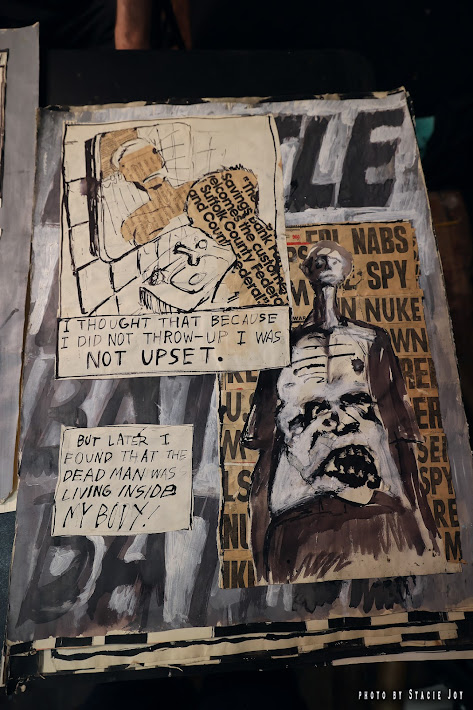 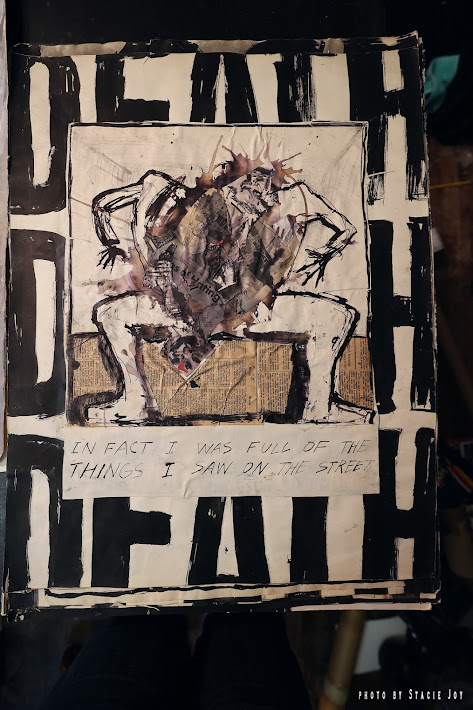 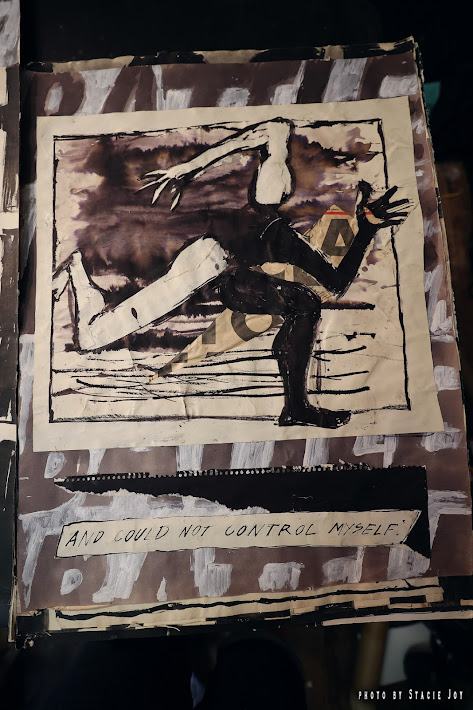 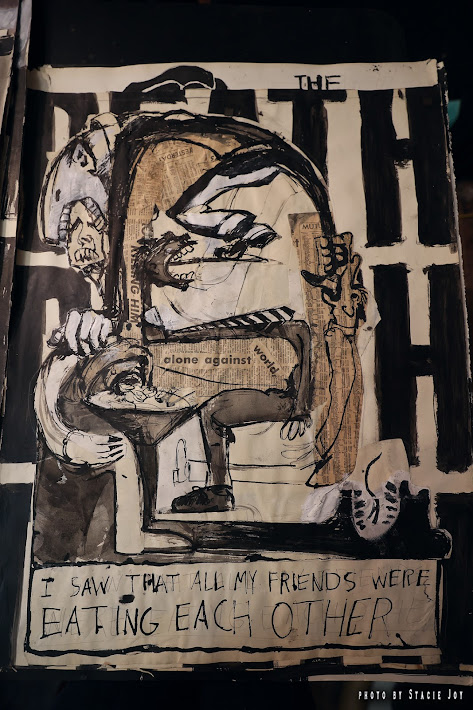 When was the last time you were inside Charas and what do you hope becomes of the building?
The last time I was in Charas was as part of a protest against the murder of Brad Will. A crowd broke in and held the building for about an hour.
Charas was where the East Village art scene met the Nuyorican art scene, but always on terms set by Puerto Rican community organizers. New York still needs a place like that. 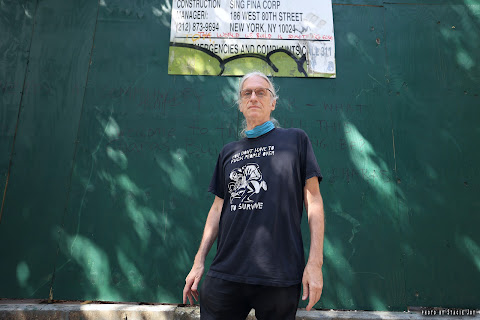 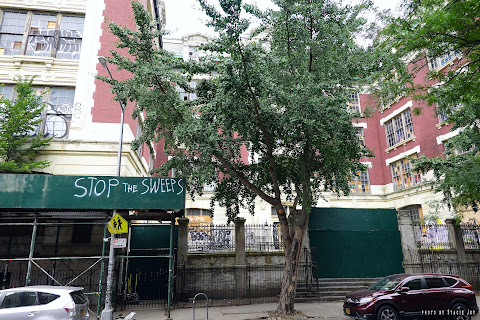 As previously reported, ownership of the property is in transition. In January, Supreme Court Justice Melissa Crane ruled that Madison Realty Capital could move forward with a foreclosure against building landlord Gregg Singer after years of delay.
Madison Realty Capital reportedly provided Singer with a $44 million loan on the property in 2016. Court records show that he failed to repay the balance by its maturity date in April 2016, and by that September, the lender filed to foreclose, as reported by The Real Deal.
Singer bought the property during a city auction in 1998 for $3.15 million. He has wanted to turn the building into a dorm, though those plans never materialized. There has been a call to return the building for community use in years past.
The building became the Charas/El Bohio Community Center after the school left in 1977. The group was evicted in December 2001 when Singer took over as the landlord.
Posted by Grieve at 5:30 AM

I have always LOVED Seth's work. Thanks for digging deeper and sharing this. I wish we did have this old space or another one like it where artists and kids and people like myself could work together and then everyone is rewarded and REAL community is established. I miss life before the dreaded cell phone people. We have lost so much.

Excellent interview, Stacie! Thank you for this.

Thank you for this interesting interview, and documenting our neighborhood's history.

Armando Perez and Chino Garcia were the main people at Charas. Armando wanted to fight to keep the building but he was murdered allegedly by drug dealers at his former wife's building. Chino at some point decided not to physically resist an eviction and Charas remained empty since then. One of the groups using Charas was the Latin Kings who helped young people make resumes for jobs. Part of the history and the fight is still going on today.

As a writer, it's fascinating to hear how he found his voice.

What an excellent interview. You always do such good work, Stacie.

Thank you for writing about this. I agree it is really interesting to hear how Seth found his voice -- so to speak -- through the plainspokenness of the children.

It's great when artists call out and recognize the other artists that were on the scene.

Fantastic article between two artists!!! Intelligent, compassionate, and historical in the representation of a neighborhood.that believed in social justice and art. Great work!!!