Plywood removal at the former P.S. 64 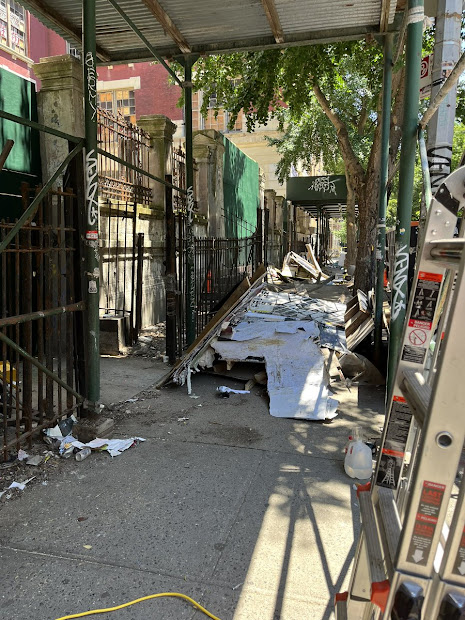 Reader photo above; the rest by Stacie Joy
Workers last Thursday removed the sagging, wheatepaste-filled plywood from the Ninth Street side of the former P.S. 64 between Avenue B and Avenue C.
We expected to see some replacement plywood go up in its place... but for now, as these photos this week by EVG contributor Stacie Joy show, you can still see into the old school (and, later, Charas/El Bohio Community Center)... only the doorways remain boarded up... 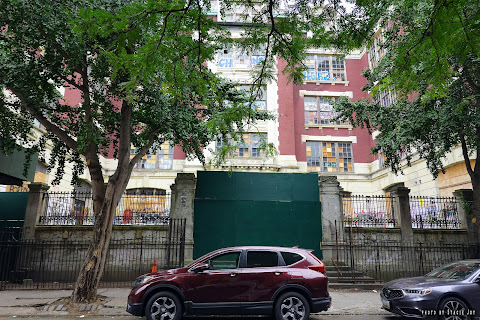 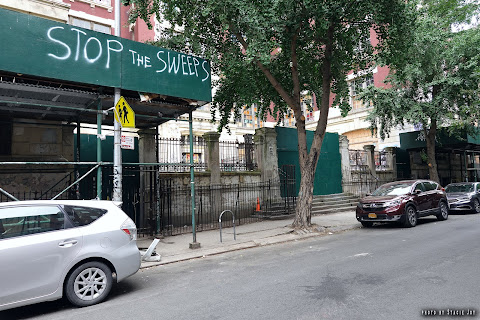 According to a source on the block, there has been activity inside the long-empty (23 years) building... with an executive-type overseeing work, including window and door replacement. It's unknown who's in charge of work here or the scope of the renovations.
As previously reported, ownership of the property is in transition. In January, Supreme Court Justice Melissa Crane ruled that Madison Realty Capital could move forward with a foreclosure against building landlord Gregg Singer after years of delay.
Madison Realty Capital reportedly provided Singer with a $44 million loan on the property in 2016. Court records show that he failed to repay the balance by its maturity date in April 2016, and by that September, the lender filed to foreclose, as reported by The Real Deal.
Singer, who bought the property from the city during an auction in 1998 for $3.15 million, has wanted to turn the building into a dorm, though those plans never materialized. There has been a call to return the building for community use in years past. 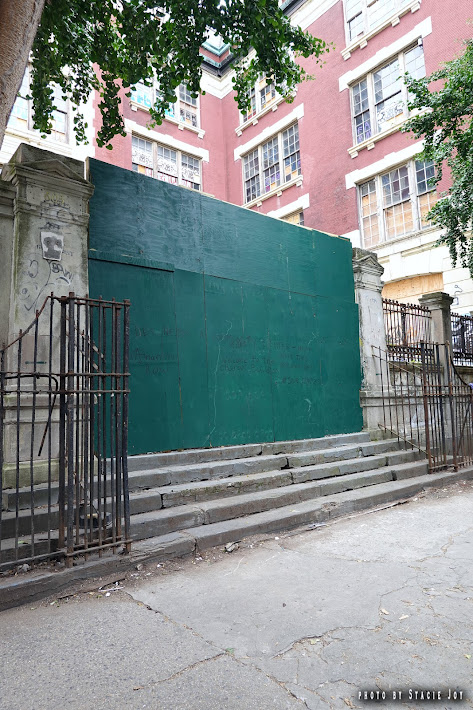 The plywood removal also uncovered an undated piece of art (the work is by Seth Tobocman, and we'll have more about the backstory in a separate post) ... 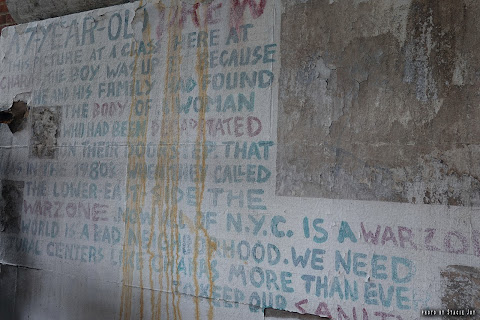 ... that reads (thanks Jeremiah Moss for the inscription):

"A 7-year-old drew this picture at a class here at Charas. The boy was upset because he and his family had found the body of a woman who had been decapitated on their doorstep. That was in the 1980's when they called the Lower East Side the warzone. Now all of N.Y.C. is a warzone. The world is a bad neighborhood. We need cultural centers like Charas more than ever to keep our sanity." 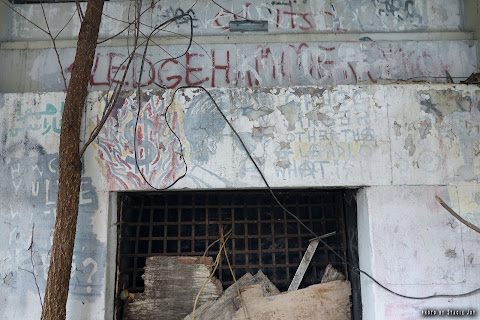 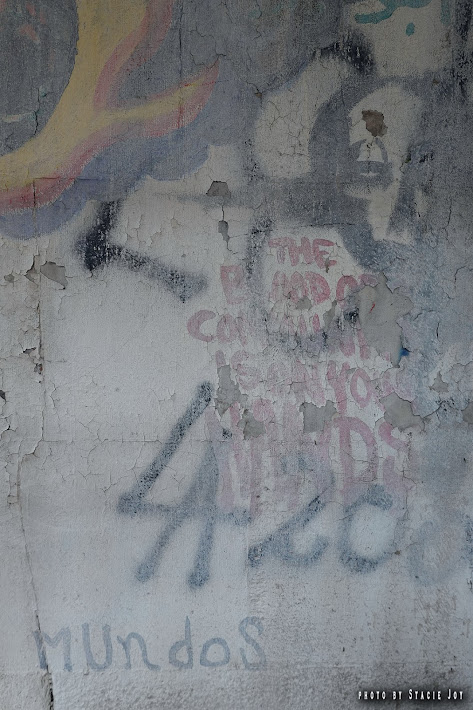 Meanwhile, a tent or two with unhoused residents remains under the sidewalk bridge (the site of multiple sweeps by the city) ... as well as a sitting-in-a-car detail from the Massachusetts-based Madison Security Group hired to keep people (TikTokers!) from getting inside the building.
Previously on EV Grieve:
• Questions, and concerns, remain over private security detail outside the former P.S. 64
Posted by Grieve at 5:00 AM

Gregg Singer should be in jail for this.

Agree - how this can fester on is amazing

If there's work being done there should be a building permit???

The real betrayal was by Rudy Giuliani, who put it up for auction in the first place for absolutely no reason except wonton cruelty. (Rudy has of course since shown more of his true nature such that he may land in jail.)

After many a standoff with NYPD during the Koch, Dinkins, and (later) the Giuliani administration, Maryhouse invited filmmaker Lech Kowalski and an unforgettable band of street people to come over and show his documentary, "Rock Soup." Supposedly this film is available on DVD, but Amazon is all out. If you want to see what East 9th Street looked like at that time, and the lengths to which people went to preserve their dignity (not to mention serve soup to their neighbors), this film is a smashing, if low budget, success.

Not for replacing a door and broken windows