The former Baker's Pizza space is for rent on Avenue A 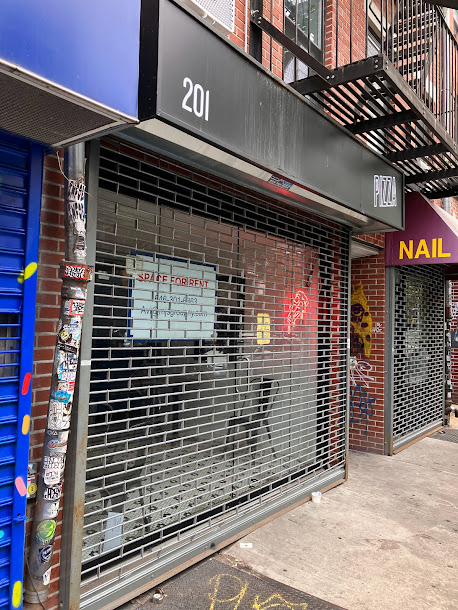 The storefront at 201 Avenue A is now for rent... officially bringing an end to Baker's Pizza here between 12th Street and 13th Street.
A "Permanently Closed RIP" message was posted atop the pizzeria's website in January. However, several weeks later, the pizzeria reopened (though not by original owner Jordan Baker). BPII didn't last, though, long as the gates came down and a DOH sticker arrived on the door dated March 31.
There was an unsuccessful DOH inspection that closed the place. Dec. 1 with 43 violation points, per public records. (According to multiple readers/Baker's Pizza fans, the shop never reopened after the December DOH visit.) We do not know who was running the place in parts of February and March (and without ever clearing up the DOH business).
In any event, Baker's arrived in February 2016 and quickly built a fervent fanbase.
Posted by Grieve at 4:53 AM

:’( best pizza on Ave A. My apartment dwellers are Buratta loyalists now. RIP Baker’s Pizza, you were too young.

I've been waiting for this post, but it's still sad news. Baker's was just a great, neighborhood pizza joint. No pretense, good pizza, fun and friendly staff... they will be sorely missed.

We are lucky that Burrata picked up the pizza torch though. The vibe is very different, but the pizza is top notch!

Too bad. Burrata is pretty crispy. Ill walk over to 11B.

Why does every pizza joint in this space shut down? Baker's was great pizza and the employees were the best. I did feel bad for them that they didn't have AC.