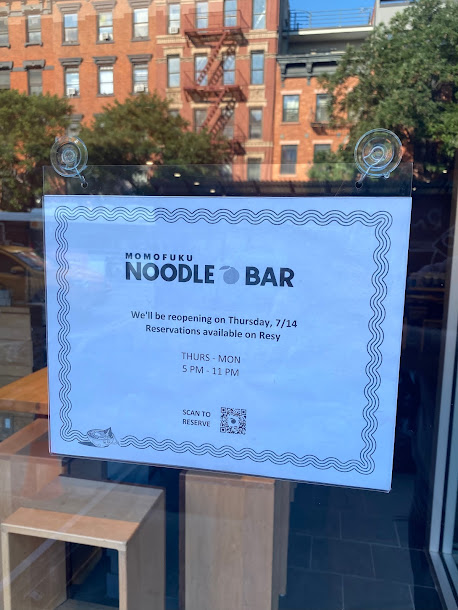 Momofuku Noodle Bar returns to service on Thursday evening at 171 First Ave. between 10th Street and 11th Street. (Thanks to Steven for the photo!)
The flagship outpost in David Chang's empire closed in February for what was to be a month-long revamp... and that stretched into five months. The Noodle Bar Instagram described this as "a few long months of kitchen renovations."
Hours moving forward: 5-11 p.m. Thursday through Monday.
The Noodle Bar — Chang's debut restaurant — opened at 163 First Ave. in 2004 before moving a few storefronts away to this space several years later.
Posted by Grieve at 4:46 AM

Email ThisBlogThis!Share to TwitterShare to FacebookShare to Pinterest
Labels: Momofuku

Before going to any of Chang's establishments, please know the guy has always treated his staff terribly. People in good conscience should not enable people like himself any longer by unfortunately the only way possible, with our wallets :

This guy ain't lying. Worked there for years. Dave is not a nice guy.