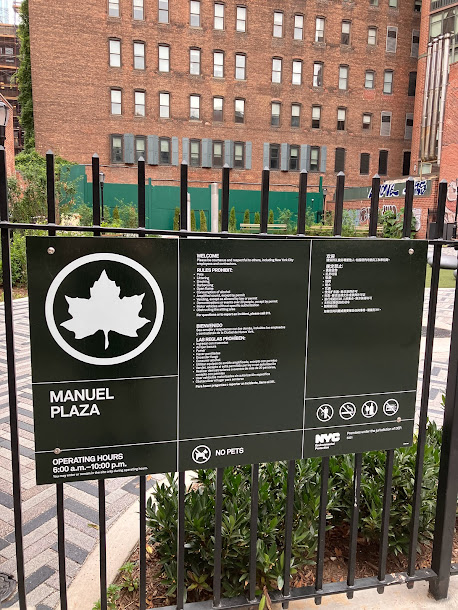 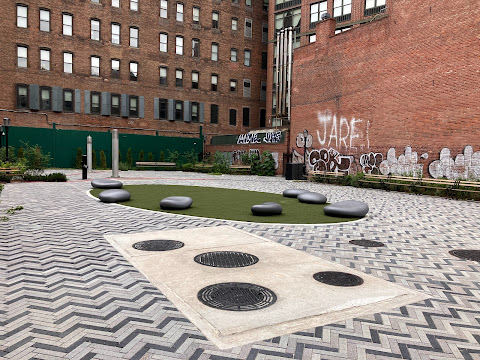 The space — on a site used by the Department of Environmental Preservation — has been open to the public since late May (as we first reported).
Friday's dedication also offered more details about the name of the space — Manuel Plaza. According to a city press release:

Manuel Plaza ...  is named in acknowledgment of the first North American free Black settlement, known as the Land of the Blacks. The name honors Big Manuel, Clyn Manuel, Manuel Gerrit de Reus, Manuel Sanders, and Manuel Trumpeter, who were among 28 people of African descent who negotiated their freedom from the West India Dutch Company and over 100 acres in land grants in the mid-17th Century in New Netherland.

As noted in previous posts, since the 1990s, the DEP has used this property to work on shafts connected to the underground network of tunnels that supply NYC's drinking water.
Several years ago, there were public meetings to gather ideas for "passive recreation space" here. And this is the result of those.
As a few readers have noted, the design couldn't include large trees because the space is above the water-tunnel site ... and the roots would interfere. The plaza features permeable pavers, seating, native plants, drinking fountains and synthetic turf.
The $1.58 million Manuel Plaza project received mayoral funding from the DEP ($1.31 million), as well as City Council ($200,000) and Manhattan Borough President ($71,000) funding.
This is one of two DEP sites the city has turned into public spaces. Rapkin-Gayle Plaza has also debuted at Grand and Lafayette.
Posted by Grieve at 5:01 AM

I have been enjoying this little park! True, it's not the greenest space around, but the flowers and shrubs are nice, and in the morning and evening there's plenty of shade from the surrounding buildings. I live a block away and it's nice to have a place to sit outside that's closer than Tompkins or Washington Square. There are always kids, dogs, couples, groups of teenagers, etc using the space. Say what you will but it's better than an empty lot.

Agree with 10:54am, it is nice. However, the sign now now says "no pets" so I guess no more dogs will be allowed, which is annoying. I used to take my dog that respectfully on leash, and unfortunately witnessed a bunch of other dogs off-leash and receiving complaints from next door at Merchant House. Always sucks when a couple of bad pet owners ruin it for everyone else

No pets eh. I enjoyed sitting there and sipping a coffee on my morning dog walk. Sad.

To repeat, the design couldn't include large trees because the space is above the water-tunnel site ... and the roots would interfere.

And to be clear, this is still an active DEP site... and, occasionally, city trucks will need to access the space.

Still looks like a baking dish to me, but if people are using it, I'm glad.

"To repeat, the design couldn't include large trees because the space is above the water-tunnel site ... and the roots would interfere. "

If true, then fine. However, I would like to see this statement from an independent certified engineer. The fact is densely populated cities the world over, including NYC, have large trees on many bocks. Never heard of a tree "interfering" with the water mains, gas lines, electrical or fiber optic cables. Ok, you need space for trucks to access the site. So no plant material in the center of this "park." So, forgetting about "large" trees how about planting trees and/or shrubs with shallow roots around the perimeter then? Japanese maples, Rose of Sharon, Bamboo, Climbing roses........the list is almost endless. They could all be jammed into raised beds 3 or 4 feet high. The City simply did not want to spend the money on the irrigation system and maintenance that would be needed to do this. But please stop banging on about this nonsense about large trees. This could have been cool as fuck but once again dumbed down mediocrity is the finished product of the day.

Agree with XTC, above, about the trees. Additionally, I have hearing issues and the noise from the air conditioning units and whatever other machinery coming off the back of the big residential building on the east side is as unnerving as a subway constantly going by. I wish they had built the wall higher to block it. Does anyone else have a problem with this?

This is what East River Park will look like. Bland, sterile, new, bullshit. With park cops every five feet.Like Hudson River Park. Fake grass and other shit.

If not trees, SOME effort for shade should have been the bare minimum. Retractable umbrellas against the brick wall for that whole line of benches that are brutalized by the sun throughout the day. A small water feature for character? The project was granted over a million dollars. It's just so lacking. Midtown has full on waterfalls in some of their public plazas.

Agree with previous posts. The quality of the green space for use by the community could definitely be elevated. In addition the historic naming after one of the first African descendants in NYC deserves even more attention to design quality and detail.