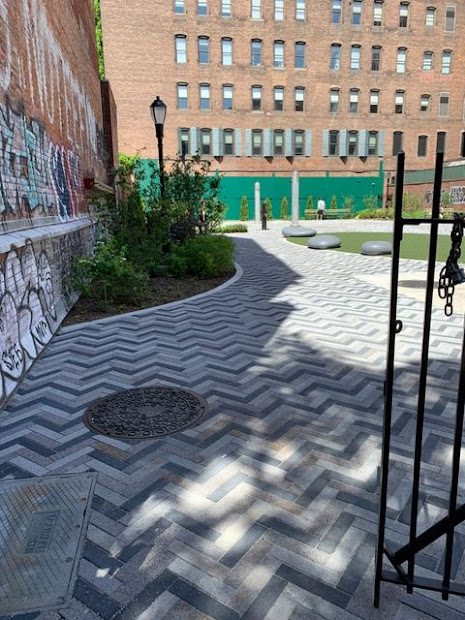 Work is complete on the new open space on Fourth Street between 2 Cooper Square and the Merchant's House Museum.
EVG reader JOY spotted the gates open yesterday... with a few folks inside the long-empty lot ... 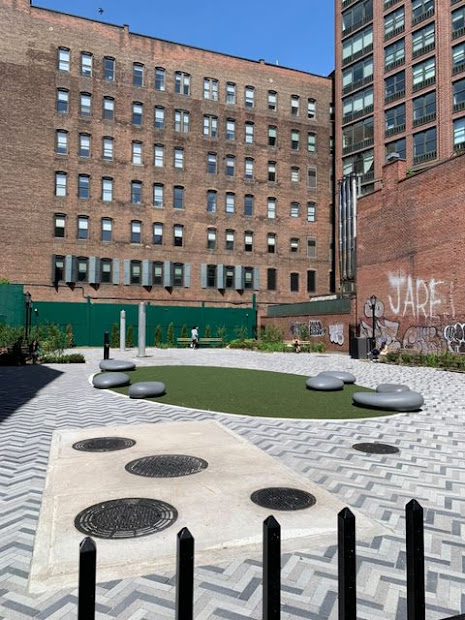 According to the Parks Department website, construction is now 100% complete... and the completion date was moved up from October to this month.
As noted in previous posts, since the 1990s, the Department of Environmental Preservation has used this city-owned space to work on shafts connected to the underground network of tunnels that supply NYC's drinking water.
Several years ago, there were public meetings to gather ideas for "passive recreation space" here between the Bowery and Lafayette. And this is the result of those.
As a few readers have noted, the design couldn't include large trees because the space is above the water-tunnel site ... and the roots would interfere.
And to be clear, this is still an active DEP site... and, occasionally, city trucks will need to access the space... as the schematic shows... 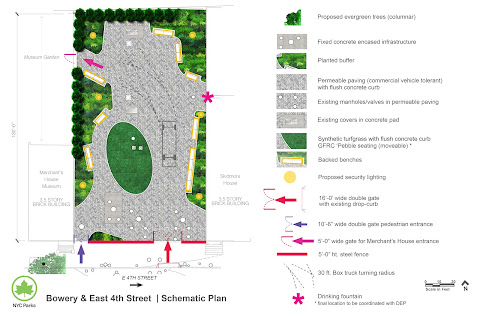 I really hope they bring in some umbrellas for shade or it's going to get very hot in there this summer.

Suggestion, trees in planters on wheels.

Gee, could they spare the benches?

How long before those green walls are tagged? 16 hours?

Awww. No matter what it is dystopian. Trees on wheeled containers? High bamboo in planters? Pergolas built out on the edges, something, anything for shade? It is going to be like sitting in a hot box. We are so desperate for green space in the neighborhood. Such a barren space. I don't want to be so negative but this makes me so sad.

Calling total bullshit on this "park". If one looks at the schematic there's approx between 4 and 10 ft of space along the perimeter that could accommodate raised beds say 4-5 ft high. That's probably several thousand feet of cubic planting space- more than enough growing room for thousands of species of shrubs, bamboo, shallow root trees, and flowering vines. In addition there are thousands of Sq Ft of vertical growing space along the walls that could easily be fitted with trellises and decorative arbors. One need only look at that massive old wisteria on Stuyvesant St to imagine the possibilities. The City simply didn't want to spend the money for a proper green space that it would have to maintain.

This space is going to be basically unusable when it gets hot. Surely they gave some thought to this?

@XTC
It's not meant as a "proper green space". It's a prettied-up "work lot".

Admittedly, it's a little short on green aspects and kind of antiseptic/sterile. Plenty of other spaces to bake out in open sunlight.

Design is important in our lives! Worth discussing.

Okay not perfect but stop complaining. It's an improvement over a lot filled with weeds. Over the years the trees/bushes around the perimeter will grow. Trees in planters with wheels (sounds like a good idea) but considering the neighborhood they would be wheeled out by the usual gang of thieves. There are indeed benches around the perimeter.

Yes it will be hot in the sun. Go in the morning or late in the day and leave the mid-day for sun worshipers.

Yes, I agree with Carol. Also, how about early evening roller skating parties? Hopscotch? Water balloon fights above the water tunnels? Use your imagination to use what ya'got!

A park with no trees or grass- the "new normal" in the East Village. What an unfriendly space!

understand lack of green--but why not more than 2 or 3 benches. Seniors can't sit on the rocks. Umbrellas great idea.

If this is a park then I'm Batman. And I'm not Batman.

There are benches. If I'm counting correctly, there is seating for 32 people on benches.

As has been said repeatedly, this space cannot be a traditional park with soil, grass and trees because it is an access point for pipes the city needs to regularly maintain. Considering they could have just put up a fence and called it a day, I think it's great the space is being offered for public use. Some murals would be fun and a few umbrellas would improve it as well.

@10:19AM: I can't imagine that any entity would permit climbing vines on the wall of the landmarked Merchant's House Museum. That's just asking for damage to the wall.

Also: Yes, it will be very sunny & therefore hot. Feel free to bring a parasol or wear a large-brimmed hat.

They say you can't polish a turd. Looks like they did a pretty good job of it here.

I am so over the negative comments here. At least there is a space for some respite if one needs rest. Is it the prettiest park in the city? NO. But, at least it is no longer an eyesore. Let's be grateful they made this spot what it is.

Actually this space reminds me of my travels in and around Copenhagen. It has an open, industrial feel to it.

Come on! Good design is good design and this is not it. They could do better.

My primary concern, actually, is for that exposed wall for Merchants House Museum. Every bit of graffiti damages the old brickwork and costs thousands of dollars to remedy. Will opening the adjoining space to the public help protect that fine old house by adding many sets of eyes who have a stake in the neighborhood? I hope so. Or will it just open up a clearer path for taggers?