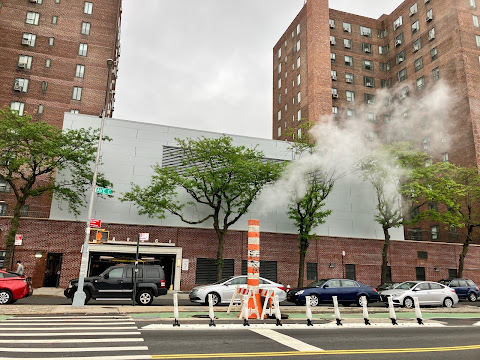 Beam Living and Blackstone have agreed not to move forward with the two proposed Combined Heat and Power (CHP) plants in Stuyvesant Town.
This news came via the Stuyvesant Town-Peter Cooper Village Tenants Association late last week.
Over the past 18 months, the TA had been working with local elected officials in speaking out about the proposed plans. (Here and here.)
In 2018, Beam Living announced plans to build a fossil-fuel-burning CHP plant between 245 and 271 Avenue C. Two years later, they announced their intention to create a larger CHP plant under a garage floor on 20th Street.
Via the EVG inbox:

"This is a highly satisfactory resolution to an issue that concerned many residents. I am grateful to all who signed petitions and postcards and came to our rallies, and to the cadre of hard-working tenants who formed our CHP strategy committee," said Susan Steinberg, president of the Stuyvesant Town–Peter Cooper Village Tenants Association. "I also want to acknowledge the effective support of our elected representatives. In particular I want to call out our Council Member Keith Powers, whose nonstop negotiations with Blackstone resulted in their pulling the project. Finally, I want to acknowledge Blackstone for its willingness to recognize how critical this issue was for us and for doing the right thing."

After years of working tirelessly with the Tenants Association, my colleagues, and residents, this is a great outcome.

A spokesperson for Beam Living, which manages Stuyvesant Town and Peter Cooper Village, released this statement to the media:

"We always take our community’s feedback seriously and are pleased with the dialogue we have had about our collective commitment to making StuyTown and Peter Cooper Village more sustainable and resilient. We are proud of the progress we have made to date and remain committed to bringing resilient and green infrastructure to our community."

No word at the moment what might happen to the already-built CHP structure (top pic) on Avenue C.
Posted by Grieve at 5:20 AM

Now if they could do something about the Dog Poop and FLYING Bicycles that are EVERYWHERE and a menace to health and well-being...

Could you imagine a power plant so close to your apartment that it touched a window? This was a bad idea from the start, relieved for this resolution.

Mopeds, motorcycles, electric bikes all on the sidewalks. Help us

"Could you imagine a power plant so close to your apartment that it touched a window? "

Yes if you look at the picture posted, on the right side, there is the CHP smokestack attached to the building. It was made to look like it was part of the original structure. Both of these CHPs had big issues, construction done before permits were issued, NYC zoning violation issues, Blackstone caught in blatant lies over and over again in their presentations, etc.

Unfortunately, the story gets worse: “If they still desire to use electricity and heat, Stuyvesant Town residents will instead be required to work 12 hour shifts in the giant coal mine located 2000 feet underneath the property. Free helmets, lanterns and safety equipment will be provided, but tenants must provide their own batteries. Children above the age of 6 will only be required to work 8 hour shifts, and free daycare for younger children will be provided by tenants who are not currently digging for coal in the mine.”

"Now if they could do something about the Dog Poop and FLYING Bicycles that are EVERYWHERE and a menace to health and well-being..."

Can't tell if sarcastic but touches on a sore issue. I got a $200 civil complaint citation yesterday for taking my dog into an enclosed playground that was completely empty. Stuytown "allows dogs" but then doesn't let them actually exist anywhere but the sidewalk (and then sends out annoyed emails when they inevitably go to the bathroom on the sidewalk). A large enclosed, card-restricted asphalt lot right next to my apartment goes unused 24/7 and yet you cannot bring a dog in there, they will fine you. It's insane.

"for taking my dog into an enclosed playground that was completely empty."

This complaint post is rather bogus. There are plenty of places to walk one's dog in STPCV including some specified gated lawn areas. There is now a dog run near one of the playgrounds where the CHP was going to be active with more dog runs to be added at other PCVST locations as well. And certain playgrounds are closed for official "Dog Day" events whereby the playgrounds are cleaned up after dog use. And those so-called "empty" playgrounds sometimes have kids playing in them, touching the ground, then putting their hands in their mouths after your dog craps in the playground. I love dogs but their parents, not so much.

That’s known as a “playground”, not a dog run. There are two public dog runs just a ten minute walk away from Stuy Town. Too far for you? I hear dogs like the exercise.

But you shouldn’t have gotten a $200 fine. An eviction notice would have been better.

They must mean that space above the old Associated. I don't think it's used for much else, might as well turn it into a dog run.

"They must mean that space above the old Associated. I don't think it's used for much else, might as well turn it into a dog run.

Since your post is totally in error about the location, why should we even entertain your suggestion?