Luzzo's debuts on Avenue B, closes on 1st Avenue 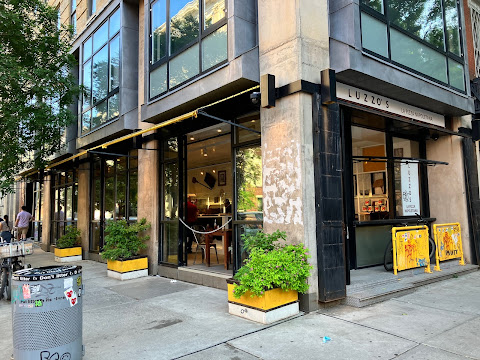 The new outpost of Luzzo's La Pizza Napoletana is now open on the SE corner of Avenue B and Second Street. (First reported here.)
Here, the pizzeria from the Luzzo's brand offers a variety of slices, 10- and 16-inch pies, assorted salads ... and other entrees, including eggplant parmigiana, meatballs and lasagna. There are a handful of tables for in-restaurant dining. Google lists the hours as daily from noon to 9 p.m., with a 10 p.m. close Fridays and Saturdays.
Meanwhile, the original Luzzo's (circa 2004) at 211 First Ave. between 12th Street and 13th Street is now closed (photos below by Steven) ... 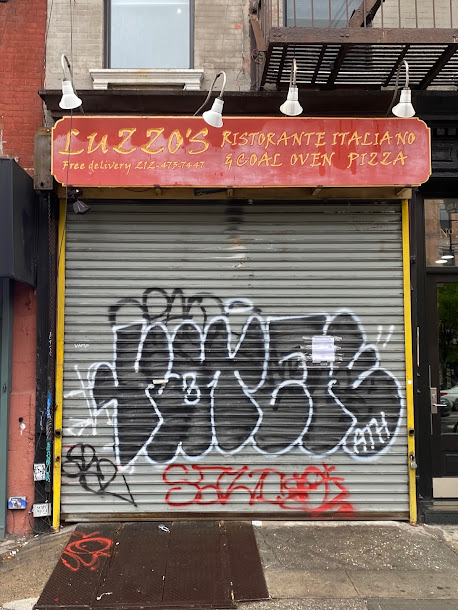 There is a Marshal's Legal Possession notice on the gate... 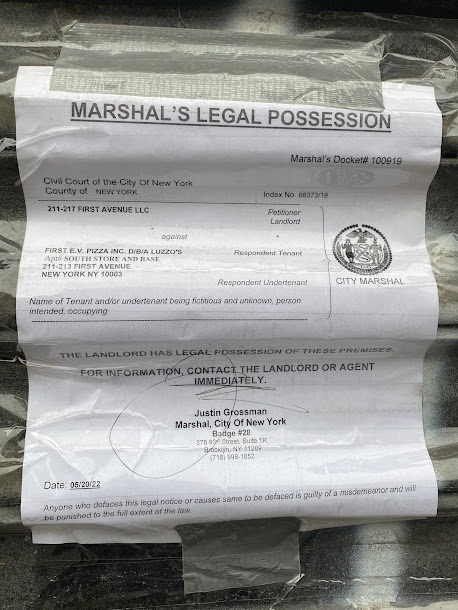 The interior has been cleaned out... 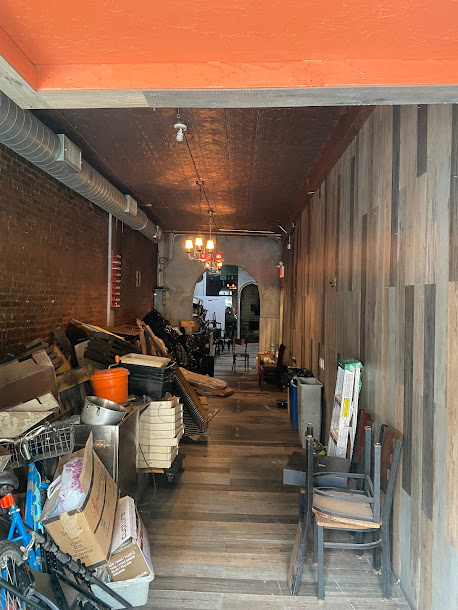 The pizzeria's coal oven, which dates to 1936, remains in the space inside. The Scott's Pizza Tour site has the fascinating history behind this particular coal oven... and why landlords likely aren't big fans of them. You can find the article here.
Michele Iuliano, the restaurateur and pizzaiolo behind the Luzzo's brand, operates several NYC establishments, including Gnoccheria at 234 E. Fourth St.
The Avenue B address was previously home to the Wafels & Dinges cafe (and corporate office) for nearly eight years. W&D, which still operates from kiosks and food trucks around the city, moved out in March 2021.
Posted by Grieve at 5:20 AM

Email ThisBlogThis!Share to TwitterShare to FacebookShare to Pinterest
Labels: Luzzo's

That's a fittingly bittersweet article. Luzzo's has been consistently one of the best pies around and that oven is a big reason. At least the new location is closer. Time to eat (even more) pizza.

I remember when Palermo bakery produced some of the best Italian bread I've ever had thanks to that coal oven. As much as I loved the bread, I guess we have to leave the coal behind.

Wow - huge loss. That oven is special and someone else has to take advantage of it.

Always a great pizza but they needed a brand boost. Millennials would literally burst into flames around that old Italian & wood panel decor — like literally burst

Horrible news (for me)! While I'm glad that they're not out of business and have found a new home, being at the opposite end of the E.V. is not good news for the good pizza-starved Upper East Village (as I fondly call my neighborhood). Their most-excellent $20 medium pizza and a salad take out deal has been a mainstay of mine during the pandemic, but I'm not likely to ever travel a mile for it.