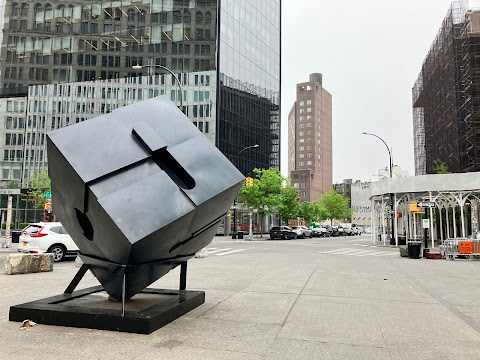 ICYMI: Workers removed the barricades surrounding the Alamo on Astor Place late last week. (Noted here and here on Saturday.)
As previously reported, barricades had surrounded the Cube — aka the Alamo — since late last fall.
We were told that the spinning mechanism for the 1,800-pound cube, which manually rotates around a pole hidden in its center, was not working.
The Department of Transportation installed the temporary in-house fabrication and support for the cube on April 27. After some painting, workers then took away the barricades. A DOT spokesperson previously told us that they didn't have a timeline for repairing the spinning component.
Tony Rosenthal's sculpture first arrived here in November 1967.
Posted by Grieve at 4:50 AM

Email ThisBlogThis!Share to TwitterShare to FacebookShare to Pinterest
Labels: Astor Place, the Alamo, the cube

Richard Gere and Ben Vereen took turns panhandling for change at The Cube on Astor Place, in Oren Moverman's probing 2014 drama of NYC homelessness, "Time Out of Mind." Ben Vereen had no trouble chatting up passersby and collecting a cup full of coins, but nobody gave Richard Gere a dime.

Oh, I have a timeline; Never

My old man arrived in NYC for a holiday during winter break from law school in early 1968. He said NYC was incredible and so alive. He visited Astor Place right after this was installed. His good buddy who was studying at nearby Cooper Union took a photo of him leaning against it with his other arm extended out. It is my absolute favorite photo in the world, which is framed, and in black and white I live in the EV. Each time I walk past this cube, I think of him. Wish he was still alive. Such an iconic staple of our hood. It embodies hope and fun. Hope it remains indefinitely.

I’m surprised nobody ever stole this cube. They steal ATMs and pretty much anything else. Would somebody please steal this cube! It would be the funniest thing in a long time. Comic relief.