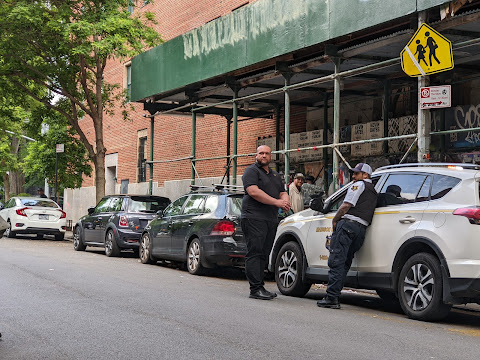 Photo by Jose Garcia
Several readers have noted that the unhoused encampment is back under the sidewalk bridge along the former P.S. 64 on Ninth Street between Avenue B and Avenue C. (The city has unsuccessfully attempted to place the residents in shelters multiple times this spring, resulting in several arrests.)
The arrival of the tents also prompted someone to hire private security. It's not known who may have enlisted the services of Madison Security Group.
Per one local resident: "A Madison Security car was stationed alongside the encampment all last night with its lights flashing at them."
Previously on EV Grieve:
• Report: 2 arrested in latest East Village encampment sweep
• Standoff on 9th Street
• In Tompkins Square Park, speaking out against the city's sweeps of unhoused encampments
• Councilmember Carlina Rivera calls for an immediate end to the city's encampment sweeps
Posted by Grieve at 3:00 PM

Good. This should not be permitted to become a permanent thing

correct, neighbor. people should have homes and services offered.

We need this team on 14th Street as well !

Who is paying for this? That can't be cheap enough for Singer.

If you think about the cost of security then the cost of helping people find a place to live doesn’t this seem really ironic?

Everything becomes a fortress. After the school incidents in Texas probably security will be beefed up in schools, too :(

You’re already microchipped with your cellphone…

Seems like much of the US has become a Third World country. Many years ago when I went to South America I was surprised to see Federal police with machine guns patrolling the beaches and nicer neighborhoods to protect them against the slum dwellers. Also every building had a concierge with a bat. Things are getting so bad even the GOP is getting more rational.

flashing lights all night on people that's not security that's harassment seems like these "security Guards" are just goons sent to fuck with the encampment rather than keep order and the area safe for housed residents this is despicable and shameful MORE AFFORDABLE HOUSING AND MENTAL HEALTH SERVICES PLEASE!

WHO is paying for this POLICE STATE bullshit????

NYPD appears to have had ENOUGH of this, so one or more carpet baggers on Ninth Street, most likely in the ICON Real Estate building on the south side of Ninth, are trying another tactic.

If rent-a-pigs try to fuck with the homeless on the LES, they will find themselves deep in shit they will not be able to get themselves out of because a MAJORITY in our community SUPPORT the homeless. Do they really want to make that movie??

Sorry chaps, you're out of luck. There's no extra money in the coffers for housing, mental health services, or proper parks. As soon as the Tombs are demolished construction will commence on the TALLEST JAIL IN THE WORLD at 30 stories high. I kid you not.

Whatever your opinion of the private security, this makes clear that Mayor Adams' efforts to "clean up" the streets are totally ineffective and political theater at best. Our mayor does not have a clue as to how to genuinely address quality of life issues in our community (I'll give him the benefit of the doubt for the moment and assume he actually cares about solving problems, and isn't mainly about his own political ambitions).