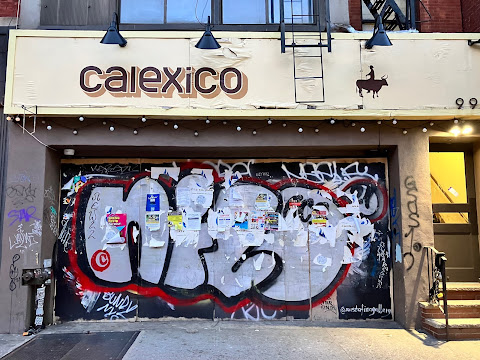 Calexico is changing up concepts at 99 Second Ave. between Fifth Street and Sixth Street.
The Cal-Mex chainlet will its East Village outpost for Big Cat, "serving Asian-Latin fusion cuisine and a mix of classic cocktails, regional draft beers and a modest wine list."
Reps for the company (founded as a food truck in 2006 by brothers Dave, Jesse and Brian Vendley) will appear before CB3's SLA committee tonight for this change in operation.
The questionnaire on file on CB3's website has more info about the new concept, including this sample menu... 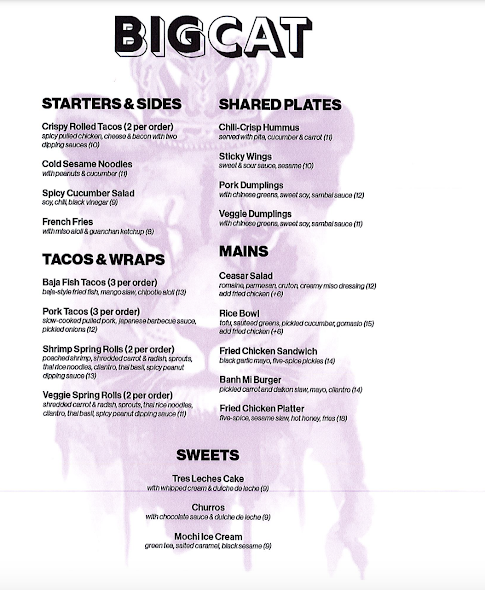 Calexico arrived in the EV in July 2019. The restaurant has been closed since late 2020.
In other items on tonight's agenda... 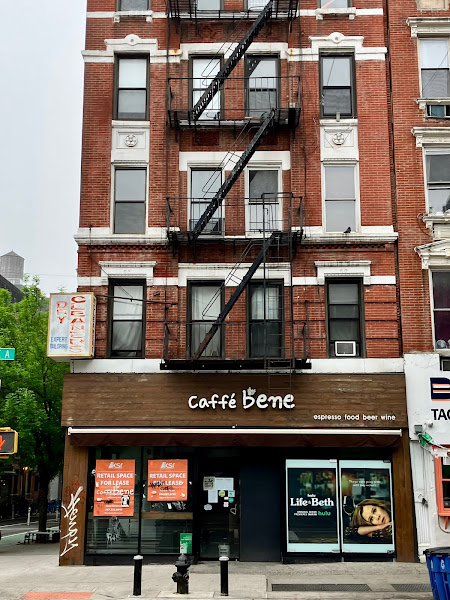 The owners of Keybar on 13th Street between Avenue A and First Avenue are looking to relocate to the more high-profile SE corner of Avenue A and 13th Street (the former Caffè Bene). You can read the Keybar questionnaire here.
And what about the soon-to-be-former Keybar space at 432 E. 13th St.?
The team behind the Spotted Owl on Avenue A and Iggy's Keltic Lounge on Ludlow Street have designs on a yet-to-be-named bar. Questionnaire here.
The committee meeting starts tonight at 6:30. Find the Zoom link here.
Posted by Grieve at 5:00 AM

Maybe Calexico could work some soundproofing into their new design. I wen there with a friend and there was only one other table occupied - with 4-5 lively people. They were so incredibly loud, my friend and I couldn't hear each other. Part of the problem was the tile ceiling and total absence of anything to absorb sound. Food was good, but we never went back. This problem is true for several well-known restaurants in the area.

Caffe Bene will be missed. Adding Keybar to an address that has never had a full liquor license is a bad idea. The last thing this neighborhood needs is another bar especially on the corner of Ave A and 13th St- there are already 6 bars on A starting with The Garret and going north.

Wasn't the Cafe Bene location once The Cock? (Before its first spot on 2nd Avenue) I was trying to remember that the other day...

I am excited for all these changes! Glad to see businesses trying something new and staying in the neighborhood!

@OlympiasEpiriot , I’m pretty sure The Cock was down one block, roughly where Gomi is now, or maybe Au Za'atar

Cafe Bene used to be a dry cleaners, my dry cleaners in fact. I'm glad Keybar found a new spot and is able to stay in the neighborhood. I used to live in 432 E 14th St (albeit the top floor). If a bar is moving in, I'd say Attila is the owner you want involved. He does care about the building residents, invests in considerable soundproofing, and ensures the crowd outside is under control. He used to live above Keybar and I believe still lives around the corner from the new location. While it can get a little crowded at times on the weekends, it gets a good mix of visitors and many long time locals from the neighborhood.

Also I used to frequent Calexico. Glad to see it coming back with somewhat of a new twist.