Spin city: The Alamo remains out of commission on Astor Place As you likely noticed in recent months on Astor Place, barricades have surrounded the Cube — aka the Alamo — since late last fall.
A spokesperson for the Village Alliance told us this earlier this year: "The Cube, unfortunately, needs some repairs to its base. We are working with the DOT to get it in tip-top shape."
We're told that the spinning mechanism for the 1,800-pound cube, which manually rotates around a pole hidden in its center, is not working.
A DOT spokesperson told us that workers installed "the temporary in-house fabrication and support" for the cube on April 27. 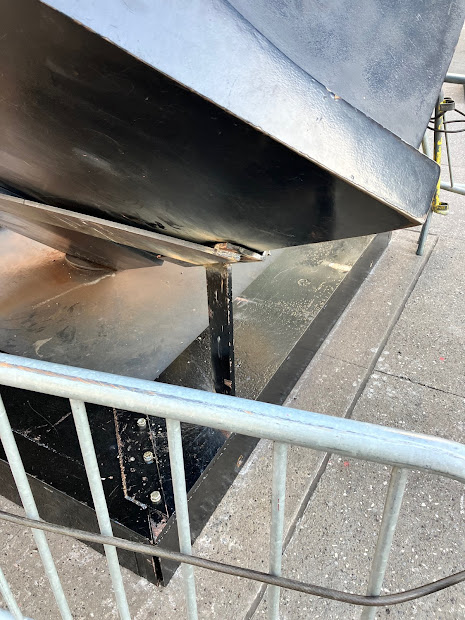 And next?
"We are completing the painting for phase 1 and the barriers will then be removed," the DOT spokesperson said. "No timeline at this time for the second phase."
So there won't be any spinning of the cube for the foreseeable future (despite the annual lubing of the cube)...
Tony Rosenthal created the Alamo, then titled "Sculpture in Environment," .... and it arrived here on the south side of the Astor Place subway entrance in November 1967. Read more Cube history here.
Posted by Grieve at 5:00 AM

Geeze! How the F?
They just did a full refurb on this thing a few years ago. What's the problem? Was it done by the same people who do our street repairs?

Yeeah! I'm older than a cube.

Abolish nyc DOT and start over. They can’t get anything right.

Saw some of Tony Rosenthal's sculptures at a museum in Virginia.They were relegated to an obscure section of the museum grounds where no one goes.They seemed to be just dumped there,no plaques or nothing saying what or by whom they were of.I had to go inside the museum and inquire myself to find out.
The Times once called him the sculptor whose name no one knows.I believe it