[Updated] About Raife Milligan, the NYU student who police said was killed by a drunken driver on Houston Street 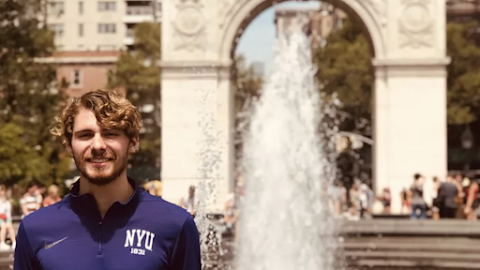 Raife Milligan was a junior studying BioChemistry at NYU with aspirations of becoming a doctor.
On Monday, around 2:45 a.m., Milligan was crossing Houston Street at First Avenue when police said he was struck by a Chevy Camaro. Witnesses said the car was speeding.
EMTs transported Milligan to Bellevue with severe head trauma. He died later this week. He was 21.
Milligan was from Jasper, Ind., where a family friend has established a GoFundMe to help with expenses.
From the fundraiser:

He just loved life to the fullest always thinking of others first. While in New York he did volunteer work delivering food to the elderly. He loved playing video games ... He also had a huge passion for playing volleyball. He joined a club volleyball team at NYU and loved every single minute of it. He found a great group of friends when he first came to New York. They all loved hanging out by the Hudson River watching sunsets and throwing frisbee. He had a profound love for the Beatles and has acquired quite the collection of vinyl records.
He loved his family with all his heart especially his twin, Reece, as well as his sister, Ryanne and brother Reid. His twin nieces, Coltrane and Era, adored their Uncle Raifey.
Raife was one in a million. Brilliant beyond his years. Saying he will be missed is an understatement. He impacted so many lives in a positive way and will be greatly missed.

According to the Daily News yesterday, police charged 49-year-old Queens resident Michael De Guzman (also spelled Deguzman in some media reports) with drunken driving and vehicular assault. Per the News: "He was released without bail after a brief arraignment proceeding. None of the charges were bail eligible, officials said." [Updated 5/7: The Post reports that De Guzman was "than 1.5 times over the legal blood-alcohol limit at the time of the crash." In addition: "De Guzman was charged with felony vehicular assault in the second degree and two counts of operating a motor vehicle while intoxicated, according to the Manhattan District Attorney's Office. He was arraigned and granted supervised release at the request of prosecutors."
De Guzman was reportedly driving eastbound when he struck Milligan. De Guzman then collided with a Honda CRV driven by a 52-year-old man. De Guzman, two of his passengers, and the other driver were all taken to Bellevue Hospital in stable condition, per reports.
Since December, the driver has reportedly received four camera-issued speeding tickets per a lookup of his license plate. [Updated 5/7: The Post reports "the vehicle also gathered 25 parking tickets, including one for blocking a crosswalk in Queens and another for violating a 'no standing except authorized vehicles' ordinance in Brooklyn."
As an EVG reader told us in our post on Monday: "The sound of the car speeding down Houston — rapidly upshifting through the gears — was so loud it woke me up." The reader then went to the intersection. "There were witnesses who were extremely upset — it was awful."
Three New Yorkers, including 16-year-old Bronx resident Alissa Kolenovic, were killed by reckless drivers in the past week. As Gothamist reported, pedestrian deaths are up 44 percent in the first quarter of 2022 compared to last year.
On Monday morning, Mayor Adams unveiled a new $4-million public education campaign, "Speeding Ruins Lives, Slow Down," which was panned by safe-street advocates and journalists.
Image via GoFundMe
Posted by Grieve at 5:10 AM

Houston Street is designed as a speed way: multiple wide moving lanes each direction.
It is too wide for a residential neighborhood and needs to be narrowed. The only way to force a driver of a Chevrolet Camarro to drive 25 MPH is by physical elements. The amount of assault vehicles on our streets: Dodge Chargers, Corvets etc. is exploding.
The intersection of 1st Av / Allen St is not designed at all: it's just a huge space covered with asphalt. It is dangerous to cross by foot, it is dangerous to cross by bike / bicycle. The city can put the same island they put on Allen St and Delancey to slow drivers down. They choose not to.
3 years ago a group of us petitioned the city to make Avenue B safer. 1000 petition signatures, CB3 resolution, a letter to the city from every elected official.
Nothing happened: Avenue B is unsafe to ride a bicycle on because of all the double parked trucks that have no curb access. The city is not taking any action because it prioritizes moving the largest amount possible of vehicles through a street and providing as much free car parking as possible.
People's lives are a lower priority.

That intersection is unsafe even if it is daylight and no one is speeding. I lived near there for 27 years. Left in 2018. Some of the walk signals aren’t long enough to get across. With darkness and speeding cars -ugh.

Very sad. It sounds like he was a wonderful person. C’mon Choresh - Avenue B is not Houston Street. Cars do not drive fast there.

And there better be murder charges for this.

The new Mayor is letting his DA let all of these criminals walk away from their crimes with no consequence. How is this not a bail eligible offense? NYC has truly become a cesspool again. Very sad. My heart breaks for this boy & all the many other victims of criminals who should have been rotting in prison.

How does one kill a person with a car while driving drunk and get released on bail?!

NYC keep handing out liquor licenses to the lower east side and more deaths will occur. Every action has a consequence.

Released without bail!? Between this new mayor, who is a dud, and Alvin Bragg, our city is going to hell. Both of these bums need to be replaced. And the two of them should be held accountable for every crime that they choose to disregard.

Thanks for covering this. I was involved with the care at Bellevue and it has been very distressing. And in my view, another example of why cars in cities are a fundamentally bad idea.

So sad , The East Village is also full of children and schools .I never see cars slow down to turn at corners or slow down .

The corner is a death trap

Amazing all these comments citing the problem as being almost everything one can come up with, except for it being one straight up criminal scumbag named Michael De Guzman.
Same kind of genius suggestions that think the solution to apartment break-ins is bars on windows. Problem solved.

No, driving drunk and speeding in the city are fundamentally bad ideas.

Many many are speeding on B, and if you try to say something, you're taking a serious risk from the response.

How is killing a pedestrian not worthy of being held in jail???

It’s madness we permit a highway to run through a very pedestrian neighborhood, as evinced by the death it causes.

@4:06PM: Since when has Houston Street been a "very pedestrian neighborhood"?? I guess you think Canal Street is, too.

I am very sorry for this young man's death; it is a tragedy to lose a promising young person this way, and his family must be in agony.

As a lifelong New Yorker, I have always considered that crossing ANYWHERE on Houston Street, is essentially taking my life in my hands. There is *no* safe place to cross, and it's that much worse now that we so many unlicensed and/or drunk and/or high and/or drag-racing people driving cars unsafely ALL over the city. (And if you think Houston St. is bad, try ANY major street in Queens).

We also have a HUGE shortage of enforcement, courtesy of our fashion-plate mayor & our worse-than-useless DA. For that driver to have been released without bail tells you what you need to know about NYC at this point in time: there are no real consequences to breaking the laws. Whether it's driving drunk, or shoplifting-as-a-career, you can count on the Adams Administration to be useless.

What a tragedy and how scary. I live at the corner of 1st and 1st and can say this is more than just an issue of a dangerous-to-cross intersection.

Ever since Phase 2 , this intersection and the neighborhood at large have become an unlivable 24-7 party zone with nonstop screaming and wooing by drunken kids, bars and cars blasting their music at ear shattering levels, speeding cars and dune buggies, and a multitude of delivery e-bikes that silently whizz the wrong way down the streets and even on the sidewalk. Not cracking down on these things, many of which are unlawful, is not only a nuisance that makes it difficult to think, sleep or even walk down the sidewalk; it attracts people like this guy who think it's okay to get drunk and speed down the avenue here. And if he was released without bail, he's not wrong.

What a tragic and useless loss of a beautiful life, a man who would have accomplished so much and as evidenced by his compassionate choices, we have all lost a wonderful neighbor and community member. This is heartbreaking. His family must be in agony. You are in my prayers. Nobody follows the 25MPH rule. The driver should be charged with murder and NOT RELEASED TO GO OUT AND DRINK AND DRIVE AGAIN.

Agree. And that’s why I left the neighborhood. Was sad to leave what I thought was home forever, but it just got unbearable.

Thank you for your service, it must be disheartening.

we need to put a patrol car on all four corners and up first avenue to 3rd street every Friday and saturday , its become ocean drive/ Bourbon street with these cars and open drinking and smoking Scooters and quads going the wrong way .

I never cross there.