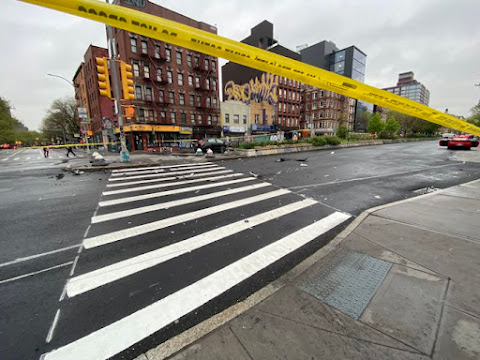 Photos via @Bentsen23
Raife Milligan, the pedestrian struck by the drunken driver, has died from his injuries. He was 21. Milligan, a native of Jasper, Ind., was a junior studying BioChemistry at NYU. There's a GoFundMe to help his family pay for expenses.
----
Police are investigating a collision involving two cars and a pedestrian on Houston Street at First Avenue that reportedly sent three people to the hospital this morning just before 3.
NBC 4 reports this:

A man in his 20s was seriously hurt when a driver hit him as he crossed a Lower East Side street early Monday, authorities said. The man was crossing East Houston at First Avenue around 2:45 a.m. when cops say a driver, possibly behind the wheel of a Camaro, swerved in an effort to avoid him. The driver hit the pedestrian anyway, then careened into a Honda.

Police have the intersection blocked off this morning... the mangled Camaro remains at the scene in the westbound lanes... 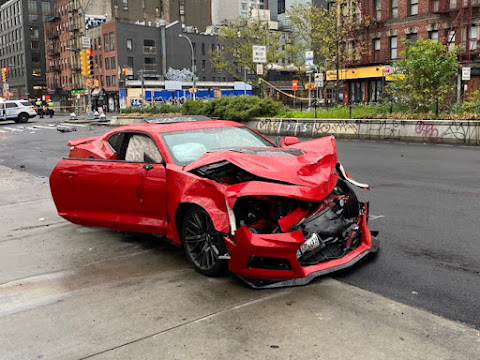 An EVG reader emailed us the following: "The sound of the car speeding down Houston — rapidly upshifting through the gears — was so loud it woke me up." The reader then went to the intersection. "There were witnesses who were extremely upset — it was awful."
NBC 4 reports that two people in the vehicles were taken to a hospital "for complaints of pain, but they weren't believed to have suffered serious injuries."
There wasn't an update on the condition of the pedestrian, who EMTs transported to Bellevue.
Updated 11:30 a.m.
The Post reports that the driver of the Camaro was suspected of being drunk.
The paper lists the victim in critical condition.
Updated 6:30 p.m.
The Daily News reports that the driver, Michael de Guzman, 49, of Astoria, was taken into custody by police and charged with drunken driving.
Although the license plate is mangled in these photos, there was a visible shot in another media outlet. As a reader noted, the driver has received four camera-issued speeding tickets since December.
The crash involving a reckless driver occurred hours before Mayor Adams unveiled a new safety campaign titled "Speeding Ruins Lives, Slow Down."
Headline updated
Posted by Grieve at 8:45 AM

I think our City Council member, our police precinct, and the DOT should "form a Commission" that will STUDY why there are cars and motorcycles roaring at high speeds up and down the LES avenues all weekend (and not just weekends) with mufflers & engines that produce sound resembling gun shots and THEN issue a "report" in about 12 months - give or take a year or ... more. Oh wait.....who?...nevermind.
We had one speeding related death on 2nd Ave. How many bodies does the city government need?

As someone who walks, jogs, rides, and drives, there is ZERO traffic enforcement for cars, SUVs, trucks, bicycles (regular and e-bikes), mopeds, motorcycles, never mind the illegal dirt bikes and ATVs. BTW, max speed limit for the FDR Drive is 40 MPH. The average speed is now around 62 MPH. There seems to be a serious accident on the FDR Drive at least every other day. It's "Mad Max: Fury Road" out there right now. Vision Zero a joke.

If the driver was speeding/racing, he needs to be charged. Too often drivers injure or kill people and are not punished at all.

And I thought that incredibly loud booming sound that woke me up last night was thunder. little did I know.

The most consistent way (though not quickest) to lower speeds is to redesign the streets. Houston Street is very wide and straight and if a driver goes 40 mph+ then it is possible to "catch" a lot of lights. Adding bumpouts, increasing greenery adjacent to the lanes, and changing the light timing would help a lot. No, it wouldn't stop everyone from driving like a maniac, but, it would work a lot better for a lot longer than what we have now

If people didn't drive so fast, this would not happen.Cars should be equipped with automatic braking, in the event driver goes 3 mph faster than permitted, the car would take over and automatically slow the car until it is within a safe range.

Excuse me but isn't that City program called Zero Vision?

Zero Vision refers to ‘Most drivers on the LES have zero vision due to drug and alcohol intake’
It is the new norm for our neighborhood.

This car has gotten 4 speed camera tickets since December! According to howsmydriving.nyc ny:KSB6834

It is a fact most if not all these car crashes/accidents/ fatalities are caused by young, and often older males driving either way too fast or intoxicated or both. My nephew's car insurance is through the roof. He's only 19 with only one speeding ticket by five miles. My niece who is two years older, pays for half of what he does with no violations. The insurance companies say that they charge males more because of the testosterone in their system and how they feel indestructible when on the road. They have to charge them higher rates at least until they are 25 or 26? I hope this driver is okay, but this kind of behavior is unacceptable anywhere, especially here in the city. This isn't the desert where you can drive in the middle of nowhere with no speed limits or consequences. Stop showing off. This isn't a pissing contest.

But the real story IMO is that those are only $50 per violation! He's also got a bunch of parking violations, and those range from $65 to $115. WTF kind of city is this where speeding in a school zone carries with it a lower fine than not feeding a parking meter?

And, while the NY Post and NY Daily News stories are mentioning that he was drunk, neither are talking about the excessive speed he was traveling at. There must be cameras that capture that as he was accelerating for blocks before he ran the guy over. Treating these streets as drag strips has to stop and the NYPD seems to be completely ineffective in getting that to happen.

Couldn’t have been said better

I'm surprised there aren't more accidents in this area. Setting the drunk driving / speeding aside for a second, the configuration of Houston Street in this area is a mess. There's no consistency with regards to where bike lanes begin an end and by Clinton Street there's this weird open cement field in front of one of the newer buildings. A few blocks down on Delancey, the bike lanes are in the street and suddenly cut through a pedestrian plaza. Whoever designed these spaces has no idea what their doing when it comes to the complicated problem of making drivers, cyclists, and pedestrians safe in the same space.

According to city data these area intersections are amongst the top 20 most dangerous in NYC:

The worst accidents I have seen have all been on Houston Street. For some reason it brings out people’s worst driving behavior. Drunk driving accidents can happen anywhere, but this area gives them plenty of targets to aim at.

Second Avenue sounds like a drag race strip weekend nights. Whatever happened to speed bumps? They make sense and work in Europe, why not here?

If only the driver had seen some of the $4m worth of "don't speed" posters, maybe this wouldn't have happened!!!!

Sarcasm aside, I'm sick and tired of these reckless drivers making the city more unsafe. PUNISH BAD DRIVERS, RESTRICT CARS, PEDESTRIANIZE STREETS. That - and not advertisements - will save lives.

The pedestrian passed away from his injuries. https://www.gofundme.com/f/in-memory-of-raife-milligan?utm_source=facebook&utm_medium=social&utm_campaign=m_pd%20share-sheet&fbclid=IwAR0G8fgW0dOcvI4INgmX2o--sa-TQYKzD-UGvF0T-kejouB9riqWc6gWI6Q

From today's NY Daily News: "Cops charged De Guzman with drunken driving and vehicular assault. He was released without bail after a brief arraignment proceeding. None of the charges were bail eligible, officials said."

So this guy is out on the street? He killed a guy driving while driving drunk - and using Houston Street as a drag strip in the process - after four speeding violations in school zones so far this year? How is he able to walk without having to post bail?

Read the Gofundme page posted by Anonymous above. It's heartbreaking. And to think this young man's killer is just walking around is infuriating.

Agreed. My best friends daughter killed by 2 taxi drivers in NYC and they were given breathalizers and let go. Her blood was still on hood of taxi cabs and there were allowed to continue on their night picking up fares.
Ridiculous. Hitting and killing someone in NYC is a misdemeaner. Ridculous. Put some punch in the laws to stop this nonsense.