Another look at the long-stalled 75 1st Ave. 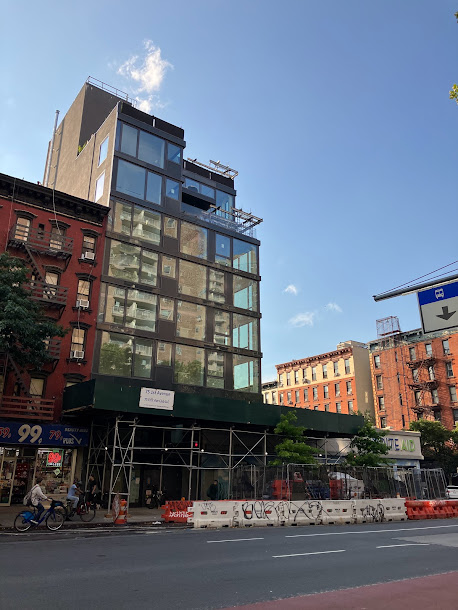 Yesterday's post about removing the sidewalk bridge outside the longtime-coming new building at 118 E. First St. prompted a few queries about another taking-its-time project — 75 First Ave.
Last year about this time, workers removed the scaffolding and sidewalk bridge from outside the cantilevering 8-story condoplex next to Rite Aid at Fifth Street.
A sidewalk bridge returned earlier this spring... and workers have been focusing on some exterior portions on the top right section of the building.
As previously noted, the groundbreaking here took place in September 2016. (The build included nearly 14 months of inactivity.) Sales commenced in August 2017, with City Realty reporting that 50% of the units sold in the first six weeks.
The venture was slowed down following a series of lawsuits between the construction manager, Pizzarotti, and the developer, the Colonnade Group.
The Real Deal reported this in July 2019:

Public records showed in 2020 that the building had a new architect of record and construction manager.
As far as we can tell, No. 75,  with its floor-to-ceiling windows, remains tenant free. The building's website is "currently private."
Posted by Grieve at 4:50 AM

The Glass House, or Philip Johnson's icon home with only glass walls for some reason makes no sense on 1st avenue near 5th street. This building will look more like a Christo project once the residents move in and install floor to ceiling curtains on all sides.

I live above and a block across from the front and side of this building. I watch it daily. I also watch it from the street. I have an opinion, based on my years on architectural design teams and overseeing construction. This is only my opinion.
Right off, a few years ago, it struck me they had too few workers on the job. And the construction labor had little to no experience working on what had been designed by the architect(s). Some of that building's design is challenging to construct.
From this EV post here, I learn where some of these issues likely have emanated.
It's been and continues to be a sad-sack situation over there. Too bad for all.

At least five Empire State Buildings could have been built in the time it's taken this project to drag on. Agree with above commenter who says there never appeared to be enough workers on site. According to one of the signs on the door, it seems they had to re-do parts of the upper floors. So, bad quality control? I'll just be happy when that garbage pile is removed from the street. That pre-dates the building.

It's beyond me how anyone could think of these apartments as suitable to live in. They are glass ovens with a view of the apartment building across the street. Desirable? Hip? Fashionable? Beats me.

I live directly next door to this fiasco. The sidewalk bridge was in front of my window for years, blocking out the sunlight.

I was thrilled earlier this year when the bridge finally came down. But when I came bak from vacation earlier this month, I just about lost my shit when I realized that the bridge was back up -- only this time it was worse, since it blocked my window even more completely. I can't even see the street.

I wish I knew when it was coming down. Unfortunately, I'm the only resident that's affected by this ridiculous bridge.

They should be fined everyday the bridge is up

Been watching this fiasco for 6 years. After it was "done" it was apparent water was leaking in the windows, as many garbage cans with plastic bags were quickly dispatched to apartments to 'catch' the water as it ran in.

Also been some issues with the glass railing on the roof, as it was been removed and is now undergoing major renovation. Obviously something wasn't installed correctly, and maybe it failed inspection.

I am not only sick of the shed here, but also the junk stored on the street.

The junk pile blocking the bike lane makes it dangerous to cross there with various types of bikes whipping up 1st avenue.

I can not wait until the storage pen is gone as well.

At this point, Rite Aid may as well just expand into the space.