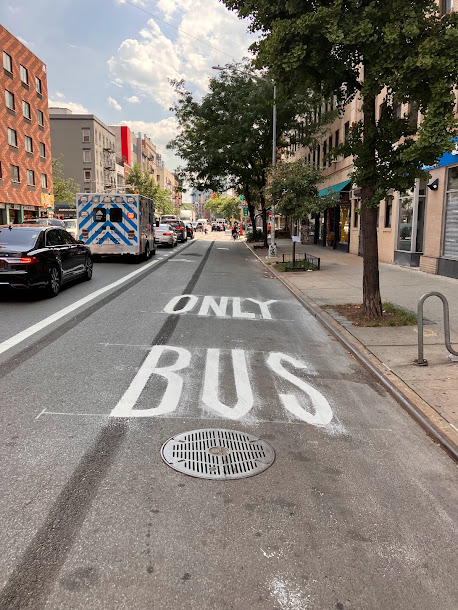 DOT crews today put down the bus-lane stencils on the southbound side of Avenue A between Fifth Street and Houston.
As previously noted, parking is no longer allowed between 6 a.m. and 10 p.m. seven days a week in select corridors on Avenue A and Avenue D in an effort to speed up bus times for the M14.
This is one of the transit improvements the city announced as part of the "Better Buses Restart" campaign in May 2021.
Posted signage along Avenue A lists other additions to bus lanes on the Lower East Side... 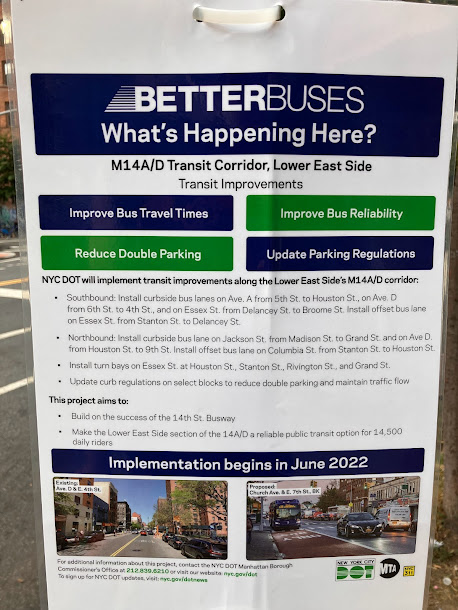 Previously
Posted by Grieve at 4:30 PM

I wonder how much time NYCDOT hopes to shave off this route. Especially since they reduced the number of stops and made the route a select bus route.

Does anyone know what bike riders are supposed to do on streets with bus lanes?

These buses are slow because they have umpteen stops every few blocks. Not because they didn’t have a dedicated lane. The traffic on this route isn’t ever that heavy.

So sad that DOT can’t seem to account for bikers and just remove an entire lane. Why not make the other bike lane at least double wide to account for both directions of bike traffic?

Same on Avenue D where traffic is never a problem. I'd love statistics to back up what these modifications are intended to accomplish. The Avenue D route is almost always overcrowded, standing room only, fights breaking out, difficulty exiting and entering due to the overcrowding. My suggestion for speeding up this route? More buses. Many, many additional buses.
From first hand experience, I can testify to many fewer people paying their fare with the pay-before-boarding system. So no increase in speed, less revenue generated and less convenience due to fewer stops. Is this a win?

Today the MTA announced a $2.5 BILLION shortfall.....which will reduce services, new equipment, maintenance of exisiting equipment, a reduction in employees and most likely a fare hike. They do not expect to make up that deficit until 2035!

The one on Ave D is idiotic and not thought out. They took out a ton of parking that low and middle class people RELY on (private lots are few and far between and expensive as hell)... and there is NEVER traffic on Ave D. It makes no sense. Ave A is annoying to because a lot of those businesses needed the parking, and people like me on bike now have to use the bus lane, which I guess is nice, but not official. Well actually it's better than a bike lane, bike lanes are trash filled with inexperienced citibikers.